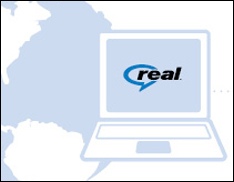 RealNetworks has promoted three executives and the formed a new operating structure. The changes are designed to bring together the companies portfolio of digital entertainment services to "foster innovation to fuel the next stage of growth" as well as set the stage for Real's spin-off of its games business.

FROM THE PRESS RELEASE

Mr. Giamatteo has served in a number of increasingly responsible executive roles at Real since 2005, most recently as president, technology products & services and international operations. Previously, Mr. Giamatteo was president and CEO of Nortel Networks Asia Pacific. In his new role as COO, Mr. Giamatteo will have operational responsibility for the company's wholly owned businesses, which include its technology products and solutions, and media software and services divisions, as well as international operations. Mr. Giamatteo also will be responsible for the company's advertising sales, platform technology, and network operations teams.

Mr. Lunsford joined Real in January 2008 as a strategic advisor. In his new role at Real, Mr. Lunsford will be responsible for corporate strategy as well as Real's interests in key partnerships and joint ventures. This includes Real's music business which in the U.S. is managed via a joint venture with MTV Networks called Rhapsody America. Prior to his work at Real, Mr. Lunsford served in a number of executive roles at Earthlink, Incorporated from 1999 to 2007, including interim CEO, president, and various other executive officer roles responsible for access and voice, broadband and brand marketing.

Mr. Zeitz joined Real in 2006, and as senior vice president of media software & services. For the past year and a half, he has been the executive with P&L responsibility for both the media software & services and games divisions. In his new role, Mr. Zeitz will continue to run the games division and lead the transition of the games division into the anticipated stand-alone public entity. Previously, Mr. Zeitz was COO for ShareBuilder Corporation, and president and COO for WorldStream Communications. Before that, over a ten year period, he held several executive positions with AT&T Wireless where he led a number of consumer marketing initiatives, including the introduction of the first wireless "one rate" plan.