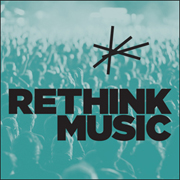 BERLIN (Hypebot) – Rethink Music will host the upcoming Rethink Music Venture Day on October 24. The day's event will include keynote speakers discussing a variety of music business-related issues. The afternoon will include pitches from "12 investor-ready start-up projects from France, Germany, Sweden and the US." The day's schedule for this free event is now available though the pitching startups have yet to be announced.

Rethink Music was created by Berklee College and Midem way back in 2010. Since then they've organized a variety of gatherings and events, often working with other organizations.

Rethink Music Venture Day, also referred to as Berlin Venture Day though I assume they'll settle on the branded version, is all about speakers, networking and venture pitches.

Networking will, of course, occur throughout the event.

"Selected from over 50 entries from 17 different countries, a total of 12 investor-ready start-up projects from France, Germany, Sweden and the US, have been short-listed to pitch their venture to a panel of judges comprising experienced music executives and investors. Presenting projects include: frictionless licensing, software for music therapy, digital distribution models, and time and geo-tagging for music, among others."

"The winner will be awarded the prize of $10,000 in legal services through an in-kind donation from Duane Morris, LLP, enrollment in an online certificate program from Berkleeonline.com; complimentary registration for Midem 2014; as well as access to investors and capital to launch their new music start-up."

Sounds like a great opportunity though two hours of pitches in the late afternoon is not a best case scenario. I would also love to know who these 12 start-up projects might be but I guess that will be saved for a later announcement.

Rething Music Venture Day takes place at nhow Berlin. The event is free but walk-ins will not be accepted so register in advance.