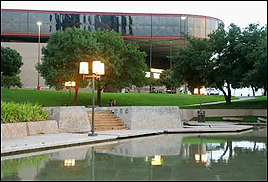 DALLAS (CelebrityAccess MediaWire) — The Dallas City Council's economic development committee has unanimously recommended that the city's 28-year-old, 19,000 capacity Reunion Arena be closed, effective June 30th so preparations can be made to demolish the structure, the Dallas Morning News reported.

The full city council still needs to vote on the issue but it is widely expected that the vote will be pro-forma as the members on the EDC constitute a majority of the full council.

The arena has been struggling in recent years and the facility has lost more than $6 million in the past 5 years, the Morning News reported.

"It's time to move on," council member Ron Natinsky told the Morning News "There is really nothing more we could do to make Reunion Arena a more marketable and useful facility than it is, and we continue to lose money."

The council isn't planning to leave Dallas residents bereft of an arena. The Deputy Mayor Pro Tem Dwaine Caraway introduced a provision to the resolution that would call on the city to renovate the sparsely-used 9,816-seat arena attached to the Dallas Convention Center, making it available to the community for rallies, religious gatherings, and entertainment.

Interestingly, the smaller arena is not covered by the non-compete clause that the City of Dallas signed with Center Operating Co, which runs the American Airlines Center. The agreement gave Center Operating the right of first refusal on any "arena-appropriate" gig, thus leaving the Reunion with only the extras.

The city is not currently planning to sell the land the Reunion stands on. If the city determines that the land is surplus, it becomes eligible to be purchased by Woodbine Development Corporation, a holding of billionaire oil mogul Ray Hunt's Hunt Consolidated for a span of 60 days. – CelebrityAccess Staff Writers