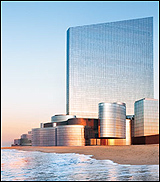 ATLANTIC CITY (CelebrityAccess) – A planned sale of the former Revel Casino property in Atlantic City collapsed on Wednesday after the Canadian investor announced that it was pulling out of the deal.

Brookfield Asset Management said in a brief statement that it had "terminated the Revel acquisition," the Associated Press reported. A spokesperson for Brookfield told the Press of Atlantic City that their decision to withdraw from the deal was based on an inability to reach an agreement with bondholders over debt related to Revel's power plant.

Brookfield Asset Management had been in talks to acquire and operate the Revel property for $110 million, substantially less than the $2.4 billion construction cost for the casino and hotel complex. The Revel Casino originally opened for business in 2012, but shuttered for good in September after filing for its second bankruptcy.

The news of the collapse of the Revel deal comes as Trump Taj Mahal Casino Resort faces possible liquidation.

According to the Associated Press, Judge Kevin Gross, who is overseeing legal proceedings for the casino, issued an order that a hearing be held to determine the resort's fate.

“The debtors are facing continuing loss to and diminution of their estates, and although repeatedly promised, are continuing to operate without debtor-in-possession financing, without which there is no reasonable likelihood of rehabilitation,” he wrote.

The casino is seeking to shed its union contracts and garner pledges of $175 million of state or local tax aid in order for investor Carl Icahn to take over and infuse $100 million into the troubled property.

If Trump Taj Mahal closes, it would be the fifth major Atlantic City casino to shutter and another bankruptcy filing is expected from Caesars Entertainment next year. – Staff writers