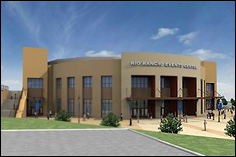 RIO RANCHO, NM (CelebrityAccess MediaWire) — Down a dirt road leading to a dirt parking lot surrounded by little more than cacti and weeds, politicians, dignitaries and a 6-foot-tall bipedal scorpion gathered in the sun-pounded emptiness that is Rio Rancho's future.

They came to a groundbreaking ceremony Tuesday for the main star of Rio Rancho's downtown development project: a $45 million arena with room for 8,200 that the New Mexico Scorpions minor league hockey team will call home. The city contracted management of the facility with Global Entertainment Corp.

"This is about creating a city," said Jim Owen, mayor of Rio Rancho. "It (the arena) is a catalyst."

By late 2006, the arena – along with a new 60,000-square-foot city hall, a new Main Street, additional infrastructure and extended roads – will be open for business on the 160 acres of desert Rio Rancho set aside for its downtown of tomorrow.

Jim Palenick, city administrator for Rio Rancho, said "the city will spend about $77 million on the downtown project during the next two years. In one to two years following that period, Palenick estimated a minimum of $100 million would be invested in the area by private developers. A hotel, a movie theater, condos and shops could move in," he said.

"In five years, we'll have a complete downtown here," he said. "This is going to be a major focus for development in New Mexico."

New Mexican hockey fans will have something to focus on too: With the arena's completion in November 2006, the Scorpions will hit the ice again after taking a season off.

The arena will provide 6,500 seats – including 64 loge seats and 500 club seats – for Scorpions fans. Also on hand are 28 luxury suites, two of which will be available for rental. Other events open up more seats to the maximum of about 8,200.

Plans for a similar arena in Albuquerque's Downtown are on hold after the city and the developer pulled out earlier this year. Albuquerque is preparing new requests for proposals, city officials have said.

A representative of the company leading the Rio Rancho arena's construction and marketing said Tuesday that luxury seat ticket packages have been sold.