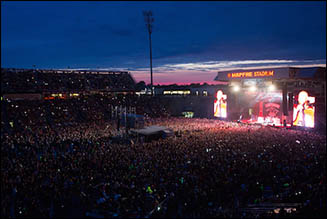 COLUMBUS, OH, (CelebrityAccess) — Rock On The Range marked its tenth year with the second consective sell-out for the three day rock festival.

Held from May 20-22, this year's Rock On The Range saw 120,000 "Rangers" descended on Columbus, OH, with a lineup that featured Red Hot Chili Peppers, Rob Zombie, Deftones, Shinedown, Five Finger Death Punch, Bring Me The Horizon, A Day To Remember, Megadeth, At The Drive-In, Lamb Of God, Sixx:A.M., Pennywise and others.

Rock On The Range and festival partner F-ck Cancer / Dyin 2 Live also worked with the Cleveland chapter of nonprofit organization A Special Wish to help create a very special weekend for a young cancer survivor who had the opportunity to meet some of her favorite bands including Disturbed, Rob Zombie, Five Finger Death Punch, Jacoby Shaddix of Papa Roach, Bullet For My Valentine and more.

The Monster Energy-sponsored Rock On The Range is produced by Danny Wimmer Presents, AEG Live, and MAPFRE Stadium, and anchors the World's Loudest Month concert series, which features the biggest names in rock music performing in eight distinct U.S. concert atmospheres in April and May.

In honor of Rock On The Range's milestone anniversary in the city of Columbus, the festival received awards of recognition from both Columbus Mayor Andrew J. Ginther and the City Council, as well as a resolution from the Franklin County Board of County Commissioners. These commendations acknowledge the over $140 million in economic impact the festival has contributed to the city over its 10 year existence. – Staff Writers