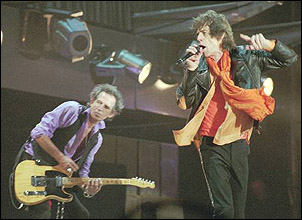 The Rolling Stones, along with NRDC (the Natural Resources Council) will stage a
special free concert on February 6 at the Staples Center in Los Angeles to raise
awareness about global warming. Global warming is the toughest environmental
challenge yet, threatening the health of people, wildlife and economies around the
world.

A private, un-named donor is absorbing all event expenses.

Fans can enter a sweepstakes to win two free tickets by completing the entry form
at www.nrdcstonesconcert.org or by mailing a 3×5-index card with the entrant’s
name, address, telephone number and date of birth to NRDC Stones Concert,
P.O. Box 15099, North Hollywood, CA 91615-5099. No donation is required to
enter or win tickets.

Online entries will be accepted December 23 through January 6, 2003. Mail-in
entries must be postmarked between December 23 and January 6 and must be
received by January 10, 2003. Only U.S. residents (excluding residents of Florida,
Rhode Island and Puerto Rico) who are at least 18 years of age may enter. Limit 1
entry per person, per e-mail address and per household.

Winners will be selected at random and announced the week of January 13. Each
winner and each guest must pick up a ticket and a wristband at Staples Center Feb
4-6 at specified times. Photo ID is required.

The NRDC is America's leading force for the environment since 1970. Backed by
more than half a million members, NRDC lawyers, scientists and other specialists
fight for tough safeguards, and make sure they're enforced. For more information,
go to http://rollingstones.nrdc.org/globalwarming/.

The Rolling Stones are completing the North American stretch of their sold out
Licks World Tour and will launch the international leg starting in Australia on
February 18 with shows to follow in Asia and Europe.