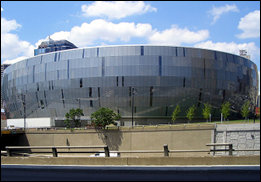 KANSAS CITY, MO (CelebrityAccess MediaWire) — The American Royal is allegedly in talks with the Sprint Center to move its rodeo event downtown Kansas City, MO, from Kemper Arena according to the Kansas City News.

The barbecue and livestock events that take up several weeks in the fall will be staying in the West Bottoms.

"We are trying to be more involved in other areas of the community because we want to be a Kansas City-wide institution not just in the West Bottoms," American Royal President and CEO Bob Petersen said, according to Kansas City News.

Petersen said the motivating factor in moving the rodeo to the Sprint Center is the city's event venues' managing group's ability to bring famous concert acts. It's a detail that could potentially triple the rodeo's audience.

Kemper Arena usually sells about 5,000 to 8,000 tickets for the rodeo, and it’s a good possibility the Sprint Center could sell out the event if they could book some popular music entertainment to go along with it, according to arena officials.

"To get top-tier entertainment, AEG brings a lot to the table. They have a wonderful reputation of being able to attract and book top-level entertainment and we struggle to do that on our own at the American Royal," Petersen said according to the Kansas City News.

It's expected negotiations will take another few weeks before a commitment is made, according to the Kansas City News.