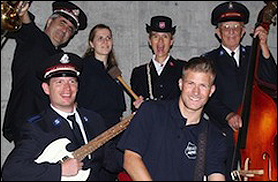 GENEVA (VIP NEWS) — A Salvation Army band is to represent Switzerland at next year's Eurovision Song Contest in Sweden.


Heilsarmee was chosen by the Swiss public to compete in the annual competition with their rock anthem, You and Me.


The group is also poised to beat the contestant age record as double-bass player Emil Ramsauer is 94 years old.


Switzerland has not won Eurovision since Canadian singer Celine Dion represented the country in 1988.


Heilsarmee won 37.5% of the overall vote to send them to the contest in Malmo in May.


However, the Associated Press reported that Swiss media have speculated whether the group will be allowed to continue.


Political songs are forbidden and it is thought the Salvation Army's Christian affiliation may fall foul of the rules.


In 2009, the official song entry for Georgia was banned after it contained a direct reference to Vladimir Putin. The country later pulled out of the competition.


Meanwhile, Turkey has become the latest country to withdraw from next year's contest.


Broadcaster TRT said the move was in protest at the new voting system in which a combination of jury and public voting is taken into account.


It also said it found the automatic qualification of the "Big Five" unfair.


The group is made up of the four biggest contributors to the European Broadcasting Union which runs the contest – the UK, Germany, France, Spain and Italy.


Poland, Portugal, Slovakia and Bosnia and Herzegovina have already pulled out of next year's Eurovision for financial reasons.


There have also been reports Greece and Cyrus may also withdraw. –According to BBC