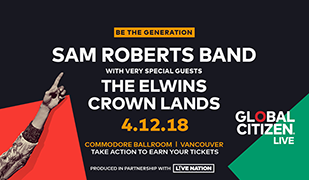 The free-ticketed event will be held on Thursday, April 12 at the Commodore Ballroom event and will also feature special performances by The Elwins, Crown Lands, and Horsepowar.

Since the first Global Citizen Festival in New York in 2012, the brand has grown into one of the largest, most visible platforms at the intersection between live entertainment and political advocacy. The organization has taken its action-based model to Australia, India, the U.K., and Germany and created a platform for activists to learn about the issues they care most about, take action, and earn rewards for doing so.

• Girls’ and Women’s Health: The health and well-being of women and girls is critical to a thriving planet and an empowered global economy that works for everyone. Canada is a global leader in women’s health and gender equality. That’s why Global Citizens are invited to call on the Canadian government to ensure Canada steps up its global leadership on women’s and girls’ health.

• Climate Change and Agriculture: For this event, Global Citizens can take action to improve the economic empowerment of women who are on the frontlines of climate change. They can call on Catherine McKenna, Canada’s Minister of Environment and Climate Change, to announce further support to help women and girls around the world adapt to climate change.

“We couldn’t be more excited to be announcing this lineup for Global Citizen Vancouver Live. The unwavering support of Canada’s leadership, artists and activists on the global stage will help ensure the improvement of girls and women’s health and their adaptability to climate change,” said Erin Thomson, Head of Partnerships for Global Citizen.