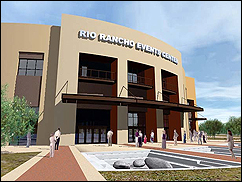 Cerelink has been working with the city for nearly two years to implement a technology master plan, and is almost ready to put some of their ideas into action with the new facility.

“There are stadiums that are playing with this kind of technology,” Cerelink President and CEO Richard Draper told the Albuquerque Journal. “But for an arena this size, in this area, it’s unique.”

The arena is currently being wired with high-tech materials that will easily allow compatibility with any technology the city decides to install in its downtown area, Draper said, include wireless Internet access throughout the entire building.

Some luxury suites are being fitted with LCD screens for tele-conferencing and presentation displays, digital white boards that transfer hand written information directly to digital files, and there will be one large LCD screening room that can be used to broadcast lectures, music or sports to a crowd for a discounted ticket price.

Draper said the technology would be a draw for business people, residents and tourists to the downtown area.

Draper plans for the arena to be a technological cornerstone for the downtown space, with opportunities including retailers being able to send out e-coupons with specials that last several hours after an event at the facility ends.

“The idea is to make the visitors’ experience that much more entertaining and use technology to do that,” Draper told the paper.

Other ideas pitched by Cerelink include digital food kiosks, which would allow people to swipe a credit card and order food to be delivered directly to their seats, or picked up without waiting in line. IBM has reportedly offered to provide the kiosks at a discounted rate so they could showcase the technology they have developed, according to Draper.

The city is also in talks with Qwest about the company possibly investing heavily in a state-of-the-art broadband fiber network under the downtown area, creating an extremely high-speed broadband provider for Rio Rancho.

Draper and Cerelink are working hard to get as much technology installed in the Santa Ana Star Arena before its October grand opening. –by CelebrityAccess Staff Writers