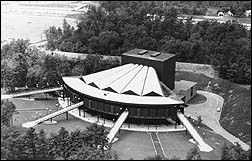 SARATOGA, NY (CelebrityAccess MediaWire) — With the recent hiring of Marcia White as New York’s Saratoga Performing Arts Center executive director, it would appear that the venue is getting back on its feet, but the financial debacle surrounding former executive director Herb Chesbrough is still causing problems.

Chesbrough is continuing to receive a large paycheck from the SPAC, as he has been kept on as a consultant to the board regarding a five-year plan of action for the nonprofit. He even no longer works at the venue, but instead from his home, according to The Business Review of Albany.

Chesbrough’s contract with the venue does not run out until 2006, but he has confirmed that he will be stepping down sooner in the wake of the devastating audit that concluded that he should get no severance pay. The audit, conducted by the New York State Office of Parks, Recreation and Historic Preservation, the landlord of the SPAC, concluded that while under his leadership, fund-raising efforts were lacking, its endowment fund had dwindled and its executives were overpaid. The report stated that Chesbrough was making approximately $60,000 more than other directors of similar facilities.

Marcia White, the new executive director, told the paper that she will be focusing on fund-raising, especially with corporate sponsors, and will rebuild the goodwill that has been lost in the community. –by CelebrityAccess Staff Writers