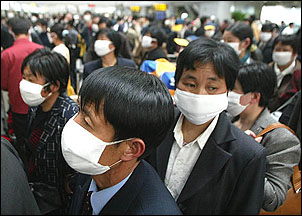 Pop star Mariah Carey has postponed her forthcoming Singapore concert due to the spread of the Sudden Acute Respiratory Syndrome (Sars) virus in Asia.

The star has not yet said when her concert, meant to have taken place on 11 June, will be staged but it is expected to be either July or November.

"Mariah, with the assessment of her management team, has decided not to proceed with the Singapore concert after taking into consideration the latest developments of Sars," concert organiser M2 group said on Tuesday.

The date will have to follow Carey's Japanese concerts in July, or come after her European tour which is in November.

So far the strain has killed more than 200 people, mainly in China, Hong Kong, Canada and Singapore.

Singapore has been one of the epicentres of the outbreak, with more than 180 probable cases reported, and at least 16 deaths since the disease was identified.

Carey is the latest music act to postpone or cancel Asian dates because of the virus.

The Rolling Stones were the first to pull out of Asian concerts in China and Hong Kong when news of the disease broke last month, although they did play a Singapore date.

Guitar virtuoso Carlos Santana stopped an 11 April gig in Hong Kong, where the virus crossed from China, and moved it to Osaka in Japan.

And dance star Moby cancelled dates in Hong Kong and Singapore because of virus fears.

Veteran US singer Andy Williams also postponed an April show until 6 June because he feared for his band's health.