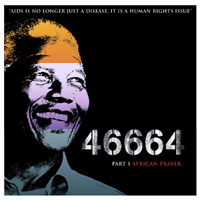 A second 46664 all-star benefit concert has been scheduled for the Les Foietes Stadium in Benidorm, Spain on August 21. The Latin based talent will include
Joaquin Cortes, Montserrat Caballe, the surviving members of Queen, Dave Stewart, Zucchero, Miguel Bose, Chayanne, Paco de Lucia, Azucar Moreno, Diego Torres, Ricardo Montaner, Franco de Vita, . and others. Attendance of 30,000 is expected with proceeds going to the Nelson Mandela Foundation, which helps fight the battle against HIV/AIDS in Africa. The concert will be broadcast on television to Latin countries as well as some others.

The first 46664 concert, which took its name from Nelson Mandela's prison number, was held in Cape Town, South Africa on November 29 and featured Bono, The Corrs and Missy Elliott. –Bob Grossweiner and Jane Cohen