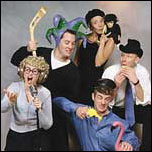 Performances will feature sketches, songs and improvisations from Second City's
40-plus year history, as well as on-the-spot topical comedy that changes with each
performance. During the tour, the troupe also will sign autographs, visit military
installations and mingle with the troops.