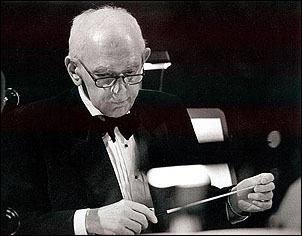 William Russo, founder of Columbia College Chicago's Music Department and the
Chicago Jazz Ensemble, died January 11 of complications from pneumonia at the
age of 74.

Russo is recognized as one of the most revered composer-bandleaders in America.
His career spans five decades and includes performance, conducting and composition
work with talents as diverse as Duke Ellington, Leonard Bernstein, Cannonball
Adderley, Yehudi Menuhin, Dizzy Gillespie, Seiji Ozawa, and Billie Holiday.

A Chicago native, Russo attended Senn High School. By the age of 21 he was chief
composer/arranger with the Stan Kenton Orchestra and later went on to lead his own
successful bands in New York and London before returning to Chicago to found the
Chicago Jazz Ensemble.

His Columbia College Chicago career began in 1965 when the school's late president,
Mike Alexandroff, called Russo home to Chicago from London, England, where he
had been founder and director of the popular London Jazz Orchestra. As the first
full-time faculty member and chair of the Music Department, Russo helped
Alexandroff build the college from 175 students and 25 part-time faculty into the
largest visual, performing and media arts college in the nation.

"Bill Russo was a musical icon," noted Dr. Warrick L. Carter, president of Columbia
College Chicago. "He was an extremely important contributor to the legacy of
Columbia. His innovative approach to music teaching, theory, composition and
arranging served as the foundation of our music program and has provided inspiration
for all of our music students."

Critics have acknowledged Russo for his striking contributions to the big- band jazz
canon. During his career he has composed and arranged more than 200 pieces for
jazz orchestra with more than 25 recordings of his work. In 1990 he received a
Lifetime Achievement award by NARAS, the organization that presents the Grammy
Awards.

Ben Segal, who founded the Oakdale Theater in Wallingford, CT in 1954, died December 27 after a short illness. He was 83.

Oakdale got its start as a 1,600-seat tent-theatre presenting summer stock Equity musicals, exploring the new theater-in-the round concept. Shortly after, Broadway musicals graced the stage. In 1972, he expanded the theater's capacity to 3,200 and the tent was replaced with a permanent wood dome. In 1996, the theater was further renovated to a 5,000-seat year-round proscenium venue. In 1998, Oakdale Theater was sold to SFX for $11.9 million in cash, and today is run and managed by Clear Channel Entertainment.

(AP)LONDON — Ron Goodwin, who composed a string of classic movie scores including "Where Eagles Dare," "Those Magnificent Men in their Flying Machines" and Alfred Hitchcock's "Frenzy," has died at 77, his wife said Thursday.

Goodwin died suddenly at his home near Reading, west of London, on Wednesday night, Heather Goodwin said. Goodwin had suffered from asthma for many years.

Although he composed some 60 film scores in his 50-year career, he was best known for the themes to a string of 1960s war films, which also included "Battle of Britain" and "Operation Crossbow."

For the past 30 years, Goodwin has toured the world as a conductor performing a mixture of classical works and popular hits, from James Bond themes to Abba tunes.

Born in Plymouth, southern England, Goodwin worked with British broadcasting stars like Petula Clark and was musical director for the Peter Sellers albums. His first score was for the 1958 film "Whirlpool."

As Ron Goodwin and his Concert Orchestra, he was signed by Beatles producer George Martin and in 1975 received a gold disc to mark 1 million album sales.

His talents were officially recognized in 1994 when Martin presented him with an Ivor Novello Award for Lifetime Achievement in Music.

Goodwin is survived by his wife and a son, Christopher.