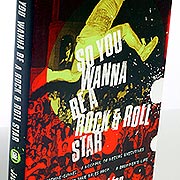 NEW YORK (AP) — Semisonic drummer Jacob Slichter learned a lot being in his band and he's ready to impart some music industry wisdom on those just coming up in the game.

He just wrote a book called, "So You Wanna be a Rock and Roll Star?" that explains the ins and outs of the music business from signing contracts to playing huge stadiums. He even goes into some lesser-known areas, such as stage fright, getting songs on the radio and making videos.

"I understood it and I got to experience some great moments," Slichter said in an interview with AP Radio. "I got to see a side of the industry that sometimes makes me glad that I'm taking a break from it all."

Slichter said someone can make a pretty good living being a musician, but rock 'n' roll wannabes should understand that you rarely make money off record sales, most of it comes from publishing or from touring.