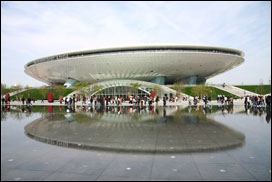 SHANGHAI (VIP-News) — Shanghai, the largest city in China, has seen a surge of top-level international acts touring the city, and the trend looks set to continue.

In a first for the metropolis, Western superstars played on back-to-back nights recently: Elton John on Nov. 23, Jennifer Lopez on Nov. 24 – both of which were sold out – and big Brit boy band Blue also playing over the same weekend.

This surge of huge international acts is no coincidence. The city is increasingly becoming a major stop for Western stars touring Asia. Adam Wilkes, Senior VP, Asia Music and Touring at AEG Live says, "The live entertainment industry in Shanghai has seen enormous development over the last few years. The biggest catalyst of growth here has been the introduction of the Mercedes-Benz Arena to the market."

The arena opened as a re-branded space in February, 2011, and is a state-of-the-art facility that has been a game-changer for Shanghai. Wilkes explains, "This new infrastructure allows top level artists to produce their shows at the same technical standard they would require in any other major international city. They have large enough capacities for the events to be financially viable and, most importantly, a world-class modern facility to ensure that fans enjoy the finest experience."

Jennifer Lopez's show for the Dance Again tour is a perfect example of this. A dazzling light show offered a level of technical expertise not seen in Shanghai before, as Wilkes noted. "J.Lo was touring an A-level production through Asia, the same show that you would see in Los Angeles or London – whereas often artists scale their productions down when touring Asia due to the high costs of moving air freight from each market or country."

He continues, "we also had Elton John performing in the Mercedes-Benz Arena the night prior to J.Lo, which was also a very large production. This is the first time in China that two major artists with completely different production requirements were able to stage back to back shows in the same venue. With a lot of advance planning, a state of art arena, and a very busy 48 hours, both events went very successfully."

The facility also hosts a smaller, 1,000-person venue in its basement called The Mixing Room & Muse, which boasts a state-of-the-art sound system, acoustics, and lighting rigs.

Wilkes notes that China in general and Shanghai in particular has previously not been very well-informed about Western acts – or even particularly interested – but that is changing. "The reaction to J.Lo's performance in Shanghai was huge – I've personally never seen a Chinese audience party and dance like that, it was like the arena turned into a massive dance club. This excitement has continued with her other performances around Asia, and is a testament to both J.Lo's charismatic stage presence and high energy performance, but also an indicator of Shanghai audiences' growing appetite for Western music."

Wilkes continues, "Chinese fans are increasingly aware of and interested in music from abroad," but he admits that not all Western artists are right for the Chinese market. "There are certain international artists that local fans have embraced, and other artists of equal fame elsewhere in the world who remain largely unknown here. We carefully research each artist's status using a variety of metrics, mainly based on their prominence across China-based online media platforms like Weibo and Youku. That seems to be the strongest indicator of popularity among the Chinese audience."

Archie Hamilton, Managing Director of the Beijing and Shanghai-based indie promoter Split Works, which has brought acts like Sonic Youth, The Go! Team and Grandmaster Flash to China, is more circumspect about the present boom. "I see the touring market in China as cyclical. We had a big boom in 2008 for international acts before that market fell off. I think that may happen again."

But Wilkes is firmly optimistic. "Shanghai will continue to be an increasingly important fixture for international artists touring Asia. This city has proven to be a viable stop on par to Hong Kong, Singapore and Seoul. Over time, more markets in Mainland China will be available for these artists, and it's plausible that they could play 5 or more cities here in the near future."