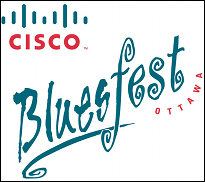 The contest will be sponsored by Ottawa's EZ Rock 99.7.

The competition is a cross-Canada talent search for the best in emerging Canadian female music talent. With the help of EZ Rock 99.7, Bluesfest is looking for promising female Canadian singers/songwriters or bands with female lead-members of any age.

"We already know that there's an incredible amount of undiscovered female musical talent in Canada," says Bluesfest's executive and artistic director, Mark Monahan according to the press release. "The She’s the One competition will not only prove it, it will go a long way to providing a boost for the careers of some very deserving musicians."

Ottawa Bluesfest organizers will gather submissions, with three finalists selected from each category.  These six finalists will have a 20-minute slot to perform at the Cisco Ottawa Bluesfest for a professional jury, on Saturday July 16, 2011. One winner will be chosen from each category. Judging will be based upon various criteria, including performance, stage presence/showmanship, originality, musicality, audience reaction, and the ever-important ‘It’ factor.

"We're hoping that participation in this contest will create more awareness of female artists in Canada," says Monahan.

Criteria for the competition and applications can be found at ottawabluesfest.ca. Deadline for submissions is midnight, March 28, 2011.