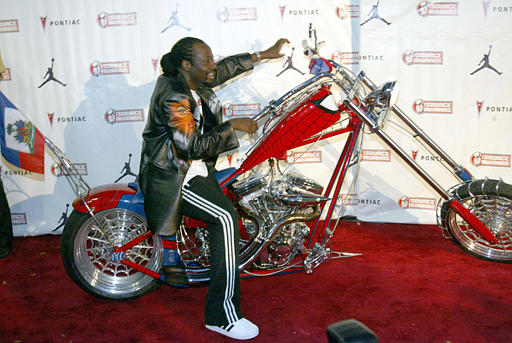 NEW YORK (AP) — Grammy winner Wyclef Jean has been hospitalized for exhaustion and dehydration after becoming ill from food poisoning, a publicist for the singer-songwriter said Thursday.

"Apparently, he was on his way back from his promotional tour in Europe and got food poisoning," Lois Najarian, publicist for Jean's record label, J Records, told The Associated Press.

"It just seemed to snowball into something that made him very sick and put him in the hospital."

Jean came down with food poisoning on Tuesday, the day after appearing at The Source Awards in Miami, she said. He was admitted to a hospital there Wednesday, and is expected to be hospitalized through the weekend.

Najarian said the singer is also suffering from exhaustion after a heavy promotional tour for his new album, "The Preacher's Son," out next month.

"The doctor is recommending that he slow down a bit," she said.

Jean, who turns 31 on Friday, has canceled some appearances, including Tuesday's GQ Men of the Year awards. However, Najarian said she still expected the former Fugees member to perform next Thursday in Times Square for a lunchtime performance. It will be followed by a free Jean concert later that evening.

Jean, whose solo hits include "Gone Till November," has also produced hits for Santana, Whitney Houston and Destiny's Child.