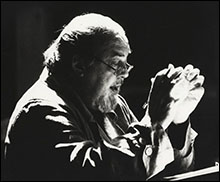 LONDON (CelebrityAccess) — Peter Hall, a celebrated stage director and Director of the British National Theatre and founder of the Royal Shakespeare Company, has died, the theatre said. He was 86.

Hall, whose career spans more than half a century, found his first major success when he staged the staged the English language premiere of Samuel Beckett’s play Waiting for Godot.

In 1960, at the age of 29, Hall founded the Royal Shakespeare Company which he led until 1968. In 1973, he was appointed as the Director of the National Theatre and oversaw the company's move from the Old Vic to a new, purpose-built facility on the South Bank of the Thames.

After leaving the National Theatre in 1988, he formed the Peter Hall Company (1988 – 2011) and in 2003 became the founding director of the Rose Theatre Kingston.

He was also an internationally recognized opera director, and oversaw the world premiere of Michael Tippett’s The Knot Garden (1970) and was Artistic Director of Glyndebourne Festival Opera (1984 – 90) where he directed more than twenty productions. Hall worked at many of the world’s leading houses including The Royal Opera, the Metropolitan Opera, and Bayreuth where, in 1983, he staged Wagner’s Ring Cycle to honor the 100th anniversary of the composer’s death.

Peter was diagnosed with dementia in 2011. He is survived by his wife, Nicki, and children Christopher, Jennifer, Edward, Lucy, Rebecca and Emma and nine grandchildren. His former wives, Leslie Caron, Jacqueline Taylor and Maria Ewing also survive him. There will be a private family funeral and details of a memorial service will be announced at a later date.