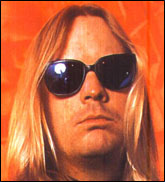 LOS ANGELES (CelebrityAccess MediaWire) — Slayer guitarist Jeff Hanneman was forced to back out of the band's tour after he was hospitalized for necrotizing fasciitis, likely contracted from a spider bite. Necrotizing fasciitis, also known as 'flesh-eating bacteria' is a fortunately rare but serious malady that destroys fat, skin and tissue cells.

Accoding to NME, Hanneman successfully underwent surgery on his right arm to treat the condition and is now recuperating at home. He will have additional medical procedures including skin grafts, and is expected to make a full recovery.

The band, however, plans to continue their tour and has announced that they will recruit a guest guitarist to fill in while on the road.

"After everything that’s happened we all agreed that we just can’t let our fans down again." said bandmate Kerry King in a statement, referring to Araya's severe back and neck pain that prompted his January 2010 surgery.

The surgery lead to the band's postponement or cancellation of numerous shows in 2009 and 2010, according to Metal Underground.

"Jeff is totally on board with the decision, so we will tour as planned. We can’t pinpoint what day he’ll be back, but it will be as soon as he possibly can. We can’t wait for him to get better and get his ass back on the road." – CelebrityAccess Staff Writers