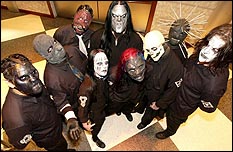 HUNTINGTON, WV (CelebrityAccess MediaWire) — A West Virginia concert promoter is suing heavy metal band Slipknot for canceling a 2001 show that he organized, and failing to reschedule as promised.

Also named as a defendant are the William Morris Agency and Ron Opaleski, who represented Slipknot, and Artist Group International and Michael Arfen, who managed the band, according to the West Virginia Record.

The suit claims Slipknot was supposed to perform on November 27, 2001 at the Huntington Civic Center, but breached the contract by canceling because a family member of one of the band members became ill.

“The defendants realized prior to the unilaterally canceling the show that the plaintiff had expended a significant amount of time, energy and money promoting the show based on the contract and that he would suffer damages as a result of the defendants breaching the concert contract,” the complaint reads, according to the paper.

Maynard is seeking $72,000 from the band. –by CelebrityAccess Staff Writers