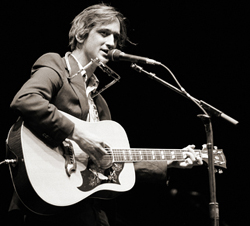 NASHVILLE, Tenn. (CelebrityAccess MediaWire) — Singer Stoll Vaughan watched as the RV he had been traveling in caught fire while being towed and went up in flames in a freak accident outside Atlantic City. Vaughan, who's currently appearing with Def Leppard and Journey, lost everything except the literal clothes on his back and had to borrow instruments and equipment from his famous counterparts to play a show in Boston the next evening.

Vaughan's personal computer, songbooks with lyrics, instruments, cameras, photos and videos from the tour were lost. The only thing he salvaged was a charred Gibson Hummingbird guitar; his favorite Gibson 1955 LG1 burned. Vaughan was riding in the tow truck when he saw the RV start smoking. Journey guitarist Neil Schon graciously gave him a guitar and the bands and crews took up a collection to help Vaughan cut his losses.

“Compassion makes it a lot easier to go through things like this, makes it bearable,” said Vaughan. “You can’t lose your songs, they’re ingrained in your psyche – at least the good ones are. The bad ones were meant to be lost,” he laughed. “I’m a guy who writes songs for a living and I have a great opportunity to tour with these bands. I have a new record out, and so I’m a blessed person.

“This is just an unfortunate event, but there’s a lot of positives in my life. When you have nothing, the closeness to your music becomes more apparent,” he concluded.

Vaughan’s sophomore album Love Like a Mule was produced by Mike Wanchic (Bob Dylan, John Mellencamp) and the Kentucky native’s music has been favorably compared to early Bruce Springsteen and Townes Van Zandt. "Quite honestly, Love Like A Mule is the disc with which Dylan's son Jakob and his band the Wallflowers should have followed-up their breakout disc Bringing Down The Horse,” Folk and Acoustic Music Exchange stated.

The third leg of the Def Leppard/Journey tour continues through the fall, with Vaughan opening dates into November. Love Like a Mule is poised to take the young tunesmith to the next level, and the high profile opening slot with two of the most well known rock bands of all time is bringing Vaughan’s introspective music to the masses.