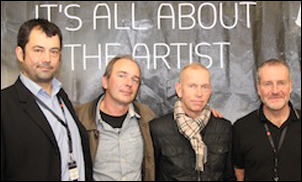 LUXEMBOURG (VIP-NEWS) — The 5th edition of the annual Sonic Visions festival took place on 23 and 24 November at the Rockhal in Luxembourg.


According to the conference’s leitmotif “It’s all about the artist” 250 delegates came together to the sold out conference to discuss, network and discover new talent.


Topics that were discussed ranged from local and very “hands-on” Luxembourg Music Talk, Musicians & Music professionals from Luxembourg in 2012, Tips & Tricks from those on the road, to content of general interest for everyone involved in the music industry.


Highlights of each conference day were definitely the closing keynotes, each one held by a renowned expert of the music industry:


Stuart Worthington (IMMF – International Music Managers Forum) gave an overview of today's music industry landscape and discussed the exciting opportunities for artists and their central role in working with a team to determine their own creative business direction.


Carl Blom (Chair MMF Sweden, CEO Flagstone Sweden) talked about the role of the manager in the development of an artist's career. He also discussed the relation between the artist and the manager and technical topics such as the different revenue streams and income models as well as certain legal aspects of the manager's work.


Also the festival, with nearly 5.000 music fans attending the two days, showed that not only the headlining bands The xx, C2C and Django Django were able to excite the crowd, but that the Luxembourg audience enjoys to discover new talents. The Austrian guys from Elektro Guzzi or Belgian artist Oscar & The Wolf as well as the Luxembourgish acts Monophona, Natas Loves You, Say Yes Dog or Hal Flavin served as an example of these two days that showed that SONIC VISIONS keeps on growing.