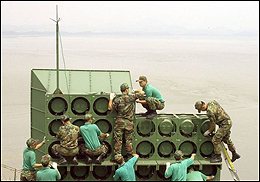 Tensions on the Korean Peninsula have been high since the torpedoing of a South Korean naval vessel by North Korea military forces and the South Korean military is considering incorporating videos of provocatively dressed South Korean girl bands on giant movie screens set up along the borders.

"It will take months to set up the big screens to use in psychological warfare operations and a wide range of contents will be shown […] I don't know whether songs by girl groups will be included, but there is that chance since pop songs were used in the past." a spokesman for South Korea's military with expertise in psychological warfare told South Korean newspaper Chosun Ilbo.

Both nations had agreed to cease propaganda broadcasting efforts in 2004, but the concept has been revived in the wake of the recent political tensions. The Associated Press reported that the South Korean military had set up 11 speaker arrays along the border between the two nations to resume the propaganda broadcasts. North Korea has threatened to shoot at the speakers and turn South Korean capital Seoul into a "sea of flame."

One can only hope that cooler heads will prevail and that K-pop will be added to the list of weapons covered under existing international arms control regimes. – CelebrityAccess Staff Writers