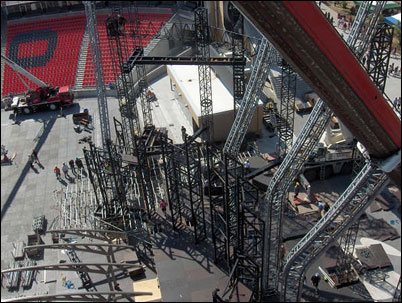 BURBANK, CA (CelebrityAccess MediaWire) — “We heard you build the biggest stages in the world,” said Discovery Channel’s Adam Bradley, when he contacted Stageco’s US office to propose a television feature about the company on the channel’s ‘Really Big Things’ show.

For the Stageco US team, Mary Lou Figley and Jeremy Shand, this was a great opportunity to give the public an insight into the work that goes into creating a large scale event. “So we jumped at the chance,” says Stageco’s Vice President of US Operations Mary Lou Figley.

They invited Adam and the Discovery Channel team to spend a day filming the company at work as they built the stage for Genesis at the Giants Stadium, New Jersey, on the US leg of the band’s recent world tour.

The Genesis stage was a particularly interesting project for the television documentary, as it was 60% custom-built and combined impressive visual impact with some tough technical challenges. Built to a plan by renowned set designer Mark Fisher, the stage featured a special structure, curved in two planes, into which a custom-built video screen fitted seamlessly.

Having a television crew present during an already tight build schedule presented extra logistical challenges. First, the necessary permissions had to be acquired from the band, the stadium and the labour unions. Once that was achieved the filming had to be built into the production schedule.

“Typically we move at a very quick pace,” says Mary Lou. “But, to allow the television personnel to document the build properly and let their host become involved, we had to slow things down a little. Safety is always the main concern during the stage installation or removal process and we had to pay very special attention to them at all times, making sure that they were not putting themselves or others at risk.”

Happily, the filming went without a hitch and the feature captured the way in which the Stageco team completed a complex build in the middle of a logistically challenging tour, demonstrating how the company has established its reputation for delivering huge stages efficiently and on time. –by CelebrityAccess Staff Writers