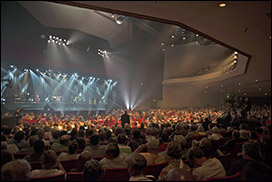 MERRILLVILLE, IN (CelebrityAccess) – White Lodging Services Corporation, owners of the Star Plaza Theatre announced that after a 37-year run, the venue will be closing for good in May 2017.

At the same time, Charlie Blum, longtime president and CEO of Star Productions, which manages and books the theater, said that he will be aggressively expanding the company's business in the realms of artist management, concert promotion, concert & event buying and television production.

A press announcement said the venue was closing as the costs of upgrading the theater to meet modern standards would have required a complete rebuild and been cost-prohibitive considering the building's current footprint.

“It is with a heavy heart that we have come to the conclusion that the Star Plaza, which has been a cultural mecca for Northwest Indiana and Chicago area residents since 1979, must close its doors. We anticipate that the building will in the future have significant age-related structural challenges that would ultimately require a complete rebuild,” said Blum. “We all recognize what the theater means to our community, and of course, it has played a huge role in my life, and the lives of my dedicated, hard-working staff.”

“I am as saddened by the closing of The Star Plaza Theatre as Charlie is,” added White Lodging Services Corporation Founder Bruce White, who also serves as Chairman of the Board. “The theater has always been successful, thanks to the hard work of Charlie and his team, and in fact, this most recent season was one of our most successful in our history, which makes this decision to raze the building even harder. I know how much it has meant to the community, our patrons from throughout the Midwest, and so many in the entertainment industry during its 37 years of operation, and I personally have spent countless hours enjoying incredible performances at the theater."

Charlie Blum joined the theater team in 1981, initially as a consultant in his position of Vice President of Marketing for the Nederlander Organization. He was officially named the president and CEO of Star Productions in 1989, succeeding Bruce White.

In addition to his duties a the theater, Blum has grown Star Productions, taking on management of the retro vocal group Under the Streetlamp, comprised of former "Jersey Boys” cast members and serving as executive producer in the group’s three PBS specials, the latest of which is set to debut later this month with a national tour to follow.

Now, with the closing of the theater, and with the continued financial backing of White Lodging, Blum will be seeking out opportunities for national tour promotion, venue booking services and finding the right opportunities for acquisitions and/or partnerships in the entertainment industry.