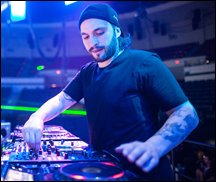 LOS ANGELES (VIP-NEWS) — DJ and record producer Steve Angello has signed with CAA for worldwide representation in all areas.

Angello, who moves from WME, was represented by CAA only for international touring.

One of the biggest names in EDM, the Greek-Swedish artist is a founding member of supergroup Swedish House Mafia, who were the first electronic music act to headline Madison Square Garden as part of their 2012-13 farewell One Last Tour.

Angello broke out a decade ago with his remix of the Eurythmics’ "Sweet Dreams (Are Made of This)." He subsequently established himself on the scene with tracks including "Woz Not Woz" (with Eric Prydz), "Tell Me Why" (produced with fellow Swedish House Mafia member Axwell as the duo Supermode), "KNAS" and "Rave ‘n Roll." With Swedish duo Dimitri Vangelis and Wyman, he recently released "Payback," one of the best-selling dance tracks of the year, and he is scheduled to release his major label solo debut, “Wild Youth,” on Columbia Records this month.

In March, Angello, a resident DJ at Wynn`s XS in Las Vegas, headlined the closing night of the Ultra Music Festival in Miami, and his upcoming festival and solo dates include the IMS Ibiza Festival, both the New York and U.K. stagings of Electronic Daisy Carnival, Brixton Academy and UMF Seoul.

Angello, who also has written and produced records for artists including David Guetta, Taio Cruz, will.i.am and Usher, founded Size Records in 2003, growing it into one of the industry’s top EDM labels, with more than 80 artists on its roster. In March, Size partnered with Google and Angello`s creative agency Rebels Studio to celebrate its 10-year anniversary with a monthlong campaign called #DECADE, in which the label gave away its entire catalog of 170-plus tracks to fans for free. Angello has recently expanded the Size brand into artist management, merchandise and, through Size Matters, global events such as Size in the Park, which after two stagings in New York`s Central Park will be held in Angello`s hometown of Stockholm this month.

As an entrepreneur, Angello is a principal in the Stockholm- and Los Angeles-based creative agency and production company Rebels Studio, which specializes in film, animation and digital content production in addition to design work for brands such as Adidas, Kraft, Google and Kanon Original Vodka (of which Angello is an owner). And in 2012, Angello was named creative adviser of the men`s apparel brand EN | NOIR, for whom he debuted exclusive music during its Fall/Winter 2014 show at New York Fashion Week in February.