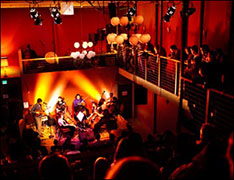 (Hypebot) – Here a former venue owner explores the possibilities behind technology bringing transparency to live performance marketplace, thereby ending what has essentially become a form of legalized extortion for artists.

Here's a fact that may surprise live music lovers: Artists may not see a cent from songs played on jukeboxes, radio, karaoke or any other music played at bars, restaurants, fitness centers or clubs throughout the U.S. Despite this, thousands of venues are required to pay as much as $5-10,000 per year to allow these songs to be played, or else risk facing expensive lawsuits. For example, a college cover band's take on "Takin' Care of Business" at a venue run by an out-of-the-loop owner who didn't pay the right fees upfront could put him out of business.

So where does this money go? Business owners across the country are required to pay Performance Rights Organizations (PROs) like ASCAP, BMI, and SESAC fees upfront. These blanket licensing expenses are oddly based on square footage and seating, and covers every potential song in their respective catalogs, rather than the actual usage of the music, and even odder is that the fees are not fairly distributed to the artists and writers behind the actual music performed. Secret proportional calculations are made by the PROs (which make billions annually) and then handed out.

Scott Ellis, director of the Fairness in Music Licensing Coalition (FMLC) and Executive Director of the Michigan Licensed Beverage Association (MLBA) recently said "the entire process is opaque for both small business users and songwriters," and others in the industry have called it "legalized extortion." Adding to the problem is the fact that the PRO system is skewed towards radio as opposed to live performances.

I'm intimately aware of all this because I've owned venues myself – and have had multiple run-ins with all three major PROs. After these negative experiences, I decided I had had enough of it, and something needed to be done. Since I have spent the bulk of my career in technology and basically “automating myself out of jobs,” I went home, wrote a patent, and filed it, and put the show on the road. It was clear to me, and others, that technology employed correctly could help solve this problem by directly identifying and tracking what's being played at these venues, leading to a more fair pay structure for venues, artists, writers and publishers.

What I came up with is called the MiC™ system, and it features patent-pending technology that would bring transparency to the public performance marketplace that is presently such a mess. This system will identify music that is played in venues, no matter if it's live, recorded, karaoke, or some other form of performance. It will track the plays and provide 100% transparency for the content owners, PROs, and business owners, in the same way that radio and streaming music services track the number of plays each song has. For the first time, writers, artists and composers of music played in these types of businesses will be paid accurately, and we hope to lower the cost of licensing to venues by allowing them to pay for actual usage, while at the same time increasing participation.

The FMLC has joined us in our goal to make public performance music agreements fairer and more transparent for small business. With the PROs collecting more than $3 billion annually from artists' royalties and the licensing system itself so skewed, we know there are millions of dollars left on the table for artists, and that's a big part of why we're doing this.

With the technology available today, there is no reason for those who create music to be totally in the dark on what's going on in venues and in the accounting spreadsheets of PROs. We're looking forward to a day when songwriters and publishers know exactly what is being played in venues throughout the country and can be accurately compensated for it. We'll be beta-testing MiC later this year, and whether you're an artist, publisher, or business owner who's passionate about live music, we hope you will join us.

Zach Bair is the CEO of VNUE (OTC: VNUE). He is a lifelong technology entrepreneur and a recognized expert and speaker in new media and revenue streams in the music business. He is also president and CEO of DiscLive (formerly known as Abbey Road Live while part of EMI); founder and former CEO and chairman of Immediatek, Inc. (IMKI); and founder and former CTO of Voyence.