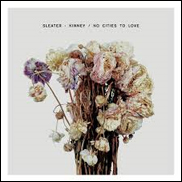 SEATTLE, WA (CelebrityAccess Mediawire) — Sleater-Kinney are releasing No Cities to Love, their first album in ten years and most explosive collection of songs to date, on January 19/20 worldwide via this very record label, Sub Pop Records, with North American and European tours to follow. , Sub Pop Records, Kept this secret for quite long.

The trio surprised fans and music publications alike by including the new song “Bury Our Friends” as a one-sided 7” with the October 21 release of ‘Start Together’ (hey, we put that out, too), a limited-edition vinyl boxed set comprising remastered versions of their seven previous albums. The colored vinyl edition of ‘Start Together’ sold out weeks before release and a second, black vinyl edition is available for pre-order now (get yets quick, they’re moving quickly).

No Cities to Love is now available for pre-order on CD / LP / DL through the Sub Pop Mega Mart, iTunes, Amazon, and Sleater-Kinney’s website. A limited, deluxe edition on white, 180-gram vinyl will also be available. The deluxe LP version features a tri-fold jacket encased in an outer slipcover, and includes two bonus tracks on a single-sided 12” with an etching on the b-side, you know, for fanciness.

A little S-K background: Sleater-Kinney formed in Olympia, WA in 1994, and set a new bar for punk’s political insight and emotional impact, earning the mantle of “America’s best rock band” (Greil Marcus/Time Magazine) along the way. Since the 2005 release of The Woods, which Entertainment Weekly called “a masterpiece” (uh-duh), Tucker has released two albums with the Corin Tucker Band, while Brownstein and Weiss released one album with Wild Flag. Brownstein also co-created and co-stars in the IFC series ‘Portlandia,’ and Weiss has recorded and toured with Quasi and Stephen Malkmus and the Jicks, among others.