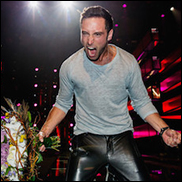 
Zelmerlöw’s ‘Heroes’ was awarded 365 points from viewers across Europe, 62 points ahead of second-placed Russia.


Although the pop credibility of Eurovision is often called into question, its organizers claim that it pulls in a TV audience of around 180m people every year.


Zelmerlöw said: “I am thrilled to have won for Sweden. It’s been a lifelong dream of mine to sing at Eurovision and winning has surpassed my wildest expectations.


“I’ve had an amazing experience in Vienna and I am very thankful to everyone who believed in the song and voted for my performance.


“I would also like to thank Jonas and the team at Warner Music Sweden who have supported my journey and I’m very excited about us working together in the future on my new music.”


Jonas Siljemark, President, Warner Music Nordics said: “Måns is a truly exceptional talent and his performance was undoubtedly the highlight of the evening.


“We are very pleased to congratulate him on another impressive win for Sweden.”


Måns Zelmerlöw will be releasing his fifth studio album on June 5. Perfectly Damaged will feature his Eurovision-winning track.


This marks the second time an artist signed to Warner Music Sweden has won the competition in four years.


In 2012, Loreen took the trophy with her multi-platinum single ‘Euphoria’ that went on to sell millions and hit number one on iTunes in 13 countries.