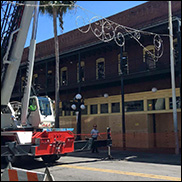 According to The Tampa Bay Times, the fire likely started from an errant spark as a welder attempted to install a new bracket to relocate a disco ball at the Amphitheatre, a popular nightclub in Tampa's Ybor City.

The Times reported that the fire quickly spread, with smoke spreading throughout the neighborhood and that 60 firefighters were eventually involved in extinguishing the blaze.

Three people were in the building at the time of the fire, but all escaped safely. however one firefighter was hospitalized for smoke inhalation, the Times said.

Grammy nominated DJ Morgan Page was slated to perform at the club on April 9th, but the show is canceled as the building is not open to the public.

Following the fire, venue owner John Santoro took to the club's Facebook to post: I'd like to first and foremost thank the community and our ‪#‎AMPFAM‬ for all their support this week – I'm truly overwhelmed with all your love. I wanted to let everyone know of a GoFundMe campaign that I've set up for my staff and their families who've been affected by the fire earlier this week. I thank you for your generous donations and support in this tough time – I am simply blessed on having such a loving community and staff. – John Santoro. – Staff Writers