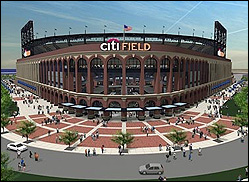 NEW YORK (CelebrityAccess MediaWire) — For some time now, corporate sponsorship of major sports venues has been a part of the landscape with companies such as Capital One and U.S. Bank paying big bucks for naming rights deals.

However, many of these same firms are now recipients of billions of taxpayer dollars as part of the federal bailout of the financial industry and critics have wondered aloud if this high-priced sponsorship has become fiscally irresponsible.

One such sponsor is Citigroup, who has, according to the Wall Street Journal, received $25 billion in bailout money from the Troubled Asset Relief Plan (TARP). Citigroup recently snapped up 20 years worth of naming rights for the new Mets stadium which is currently under construction for a cool $200 million. Ironically, the stadium, with an estimated price tag of $2 billion is already being funded largely through taxpayer subsidy.

The Treasury, which is overseeing the distribution of funds through the TARP, has been reluctant to institute any measures to limit how TARP money is used, citing concerns that such stipulations would discourage participation in the program by financial institutions.

Other forms of sponsorship such as Citigroup's deal to be a presenter at this year's Rose Bowl are less dollar-intensive but have drawn criticism as well. Citigroup, unsurprisingly, sees it as a vital part of their advertising strategy.

A spokesman for Citigroup defended the Rose Bowl deal, "For the last several years this has been part of an integrated marketing strategy and no taxpayer-funded TARP money was used for it," Citigroup spokesman Luis Rosero told the Wall Street Journal. – CelebrityAccess Staff Writers