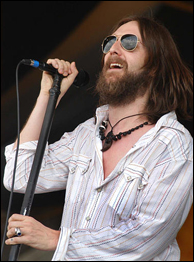 LOS ANGELES (CelebrityAccess MediaWire) — For the first time in their 18-year career, The Black Crowes will perform an album of theirs in its entirety. On a special run of “One Night Only” shows beginning March 2 and wrapping March 20, fans will experience 'Warpaint'–the group's first album of all new studio material in seven years, due out March 4–in its entirety onstage, after which the band will perform songs from their catalog and selected surprises.

A listing of these seven one-time-only tour dates is below, with the on-sale info. In the midst of this trek, the band will headline Stubbs March 15 at SXSW in Austin.

The Black Crowes launch their overseas tour March 24 when they headline the East Coast Blues & Roots Festival in Australia. They'll continue their Down Under trek–their first since 1991–through April 5, and conclude with exclusive performances in London, UK at Brixton Academy April 9 and The Amsterdam Music Hall April 11. A major market multiple night U.S. tour will begin in May, with cities and venues to be announced in the near future.

Produced and mixed by Paul Stacey at Allaire Studios, Woodstock, NY, the album features 11 songs, all of which were written by CHRIS and RICH ROBINSON, except “God's Got It” by the Reverend Charlie Jackson. “Goodbye Daughters of the Revolution” is set as the album's first single and video; the song will arrive at radio on Monday, January 7.

The Black Crowes have sold over 20 million albums and are known as one of rock's best live acts. Their panoramic live shows feature alternating set lists and signature incendiary musical explorations. Catch up with the band at www.blackcrowes.com