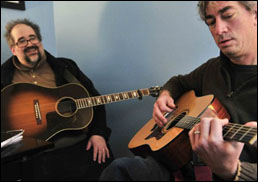 NASHVILLE, TN (Hypebot) – America's Music City is turning into Music Business City. Jim Reilley, independent songwriter and co-founder of the New Dylans knows the struggle of the uncertainty that plagues his profession. Every September, he waits to hear if he has a job for another year. Reilley is no stranger to anxiety, "That's how I've lived for the last 16 years, living one year at a time," Reilley said. "You can't help but think about that every day." Do what exactly happened to music's middle class? The answer probably lies within your nearest electronic device.

According to the Nashville Songwriters Association International, the number of full-time songwriters in Nashville has fallen by a staggering 80 percent since 2000. The unrelenting decline in album sales hit a new low this summer when they went below 4 million in August – a first for the industry since it started tracking data in 1991. Streaming services like Spotify, Pandora, etc. have been a breath of life into a bleeding industry, but even as popularity rises, their sustainability has proved fleeting and their payouts certainly don't sustain careers.

Nashville has notoriously been the epicenter of creative musical collaboration, but the once vibrant community is losing steam – and it's not the only one. Unfortunately for the the blue-collar songwriters, bands, and studio musicians, what's happening in Nashville scales across the industry. NSAI attributed the decline in songwriting jobs to the rise of music piracy, the decrease in album sales and increase in streaming services.

If there's a game changing move to be made, it would be to initiate and implement a fair market rate for singers, songwriters and musicians across the board. Without that standard, the collapse will almost certainly continue. – Laura Schneider