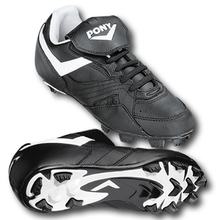 Music management company The Firm is breaking into the retail business. Using its roster of artists such as Korn, N*SYNC, Limp Bizkit, and Linkin Park, The Firm plans to revive and promote the Pony brand athletic shoe that went out of business in the early '80s through tour and live event sponsorships, having its artists wear the brand on stage and in clubs and through its Pony web site. The Firm bought the Pony name from U.K.-based Pentland Group last year.

In marketing the brand, The Firm plans to use the same techniques it would on breaking a new band and use a street "anti-marketing" approach to attract the targeted market of young hipsters.

"We want to keep it cool with the kids," David Schulte, head of The Firm's Pony division told Advertising Age. "It's a very under-the-radar map kind of play." In fact, the marketing began this summer – on urban bus stop benches and sponsorships of tours such as The Family Values Tour that featured some Firm artists. Pony was also a sponsor of the Harlem Rucker League, the oldest summer basketball league.