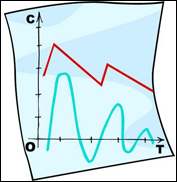 We just don't have enough data.


Let me put it to you this way. Let's say a label has ten singles. Wouldn't it behoove the company to know which one had the greatest chance of success, which one to invest money in?

But that's not the way the business is run. It's all about experience and advantage, relationships. As if an executive with decades of experience could pick hits because he's assembled a great promotion team and has plenty of dollars in his account. But the hit to crap ratio of everyone from Clive Davis to Jimmy Iovine, never mind those further down the food chain, is just terrible. It's because they're running on gut instinct instead of data.


We just don't have enough data.

We not only need to know where past records have placed on a chart, we need to know every person involved in them, who wrote the songs, how long they took to be recorded, why they were successful. If we had enough data and asked the right questions, we'd get some answers.


But no one on the inside wants it to be this way. They like the flashy entertainment lifestyle, the thought that they're irreplaceable gurus.


But success not only comes with money and experience, it comes with the edge, exploiting inefficiencies in the market. If you can figure out why this track is a hit and another is not, you can make a ton of money.


Let's start with a major label.

Who works there is very important. Not only who the head of promotion is, but his exact relationships, every record he's ever been involved in, those he quarterbacked and those he took undeserved credit for.


And the artist. Were his hits out of the box or did they develop in secondary markets? Did they break from TV?


And of course Britney and Rihanna and Lady Gaga have track records, it pays to invest in them. But can you create a model that says whether their next record will be a hit? Instead of someone operating purely from the gut, can statistics help you make an informed decision?


Picking the right single is crucial in a project, can the process be helped?


I'm reading "Moneyball". And what is astounding is not only the ignorance of the established infrastructure, but the insight of those who made a difference. And the insight came from those who were smart and educated. These attributes are abhorred in the music industry. Music is where you go if you flunk out, if you can't make it in the real world. Are the smarties going to wreck our business too?


They most certainly could.


All those Silicon Valley wizards? The financial titans? Those who weren't rescued by the government, but profited in the downturn? They saw the connection between inefficiency and opportunity. They gained an edge. Based on data. Knowledge. Not gut feel.


When does Dr. Luke have a hit? How about Max Martin? If we ran all the data on every one of their productions, we'd learn things.


If the song is cowritten, does it improve or detract from the chances of it being successful in the marketplace?


How about how long it took to record?


Who played on it.


Which company it was aligned with…

Maybe it turns out that not every Dr. Luke record is successful, only those marketed by a specific company, helmed by a certain individual.


Is it worth it to sign the now contractually free act? Was it successful because of itself or the label? Was a cowriter or producer key to its success, and are they now on the team?


This is the future of the music business. This is where money will be made.


If a band keeps costs low does their career have greater longevity? For every ten dollars you raise the price, does it take a year off their career?


Does the public really care if they pay an exorbitant amount if they have access to good tickets? That's why so many acts scalp their own tickets, they're afraid of looking greedy. Maybe this is a paper tiger, maybe the public just doesn't care.


You can run the numbers and find out.


If you ask the right questions after establishing a mountain of data and analyzing it.


So, we might learn with a teen act that you overcharge and make the money now, because statistics tell us there will be no longevity. That's what has me scratching my head with the Justin Bieber hype. Statistics tell us teen phenoms never last, why should this one be different, because Randy Phillips says so?


That's like a baseball scout picking amateurs based on his gut.

Lady Gaga… How many people want to buy her merch. What's the best way to get it to them… Is she best having a new record for Christmas, striking while the iron is hot, or waiting a year or two, fearful of overexposure.


And speaking of overexposure… Is it best to constantly engage your fans or go away? Same deal with giving away your music. If giving away music adds to your bottom line, do it. And vice versa if it doesn't.


The educated are running circles around us in every facet of life.


The music business was trounced by college dropouts with computers. Napster killed the album. You can whine about it all day long, but it happened.


I'm not saying you employ this research to decide what type of music to record. You can do this, however soulless it might be.


But once you've got the music, then what do you do?


In radio, we've got call-out research and Arbitron, that's it.


In record sales, we've got SoundScan, which revolutionized the business when it started twenty years ago.


We've got concert grosses, but how far did each patron travel to go to the show? Check the zip codes of the credit cards. That'll give you an indication of fan loyalty.


You need passion for the game and mathematical skill. And ambition. And an ability to ask the right questions.


And those willing to change, to employ this data, are going to make a ton of money.


Just one more thing… Is "X Factor" failing because people hate Simon Cowell? Before Fox invested in his show, wouldn't it have been worth it to ask this question? Research could have told you.


My gut is as much as Simon looked like the key to "American Idol", he was not. That's why it could do so well after he left and why "X Factor" is a relative disappointment. In other words, the success of "American Idol" was not about Cowell.


Is the success of Lady Gaga about herself or her producer or Troy Carter or Jimmy Iovine?


You could run the numbers and find out. Really.