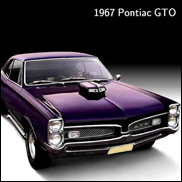 I'm fascinated by the decline of the American car industry.

In today's "New York Times" there's an ode to the GTO (http://www.nytimes.com/2009/05/03/weekinreview/03mayersohn.html). Which I knew from the Ronny & the Daytonas song, but didn't truly appreciate until the 1967 model, three years after the car's introduction, when the Pontiac was the sleekest ride on the boulevard. I had no idea that a Mercedes-Benz was an exclusive make, I'd see an XKE now and again, but if you wanted a real car, a hot rod, one that gleamed in the sunlight and impressed both the girls and your neighbors, you got an American car.

We had an endless string of them.

Trained as an engineer, my dad started off with Chryslers. He purchased a Dodge that caught fire on the way home from the dealership, but he laughed, he felt confident in his selection, he knew that's what the Chrysler brand stood for, great engineering.

But then the next station wagon lasted barely eighteen months before falling apart and we switched to Oldsmobile. That VistaCruiser drove 87,000 miles. Can you believe it! Nothing ever lasted that long.

And by the late sixties my dad had finally arrived, so he purchased a used T-Bird. Impractical with two doors for a family of five, he just beamed. And ultimately replaced it with a brand new '69, which the entire family went down to the dealer to pick out. We ordered a four door, with suicide doors in a color known as "Indian Fire", with a white vinyl roof, and an AM/FM radio. And four years later, when my dad was finally feeling flush, he graduated, to a Lincoln.

On a drive to Montreal, the wheel fell off. Literally. My dad was on
I-91 and the car started to shimmy. He exited the highway, slid into a gas station and got out of the car just in time to see the entire left front wheel buckle.

I'd like to say Ford rode to the rescue, but this was before the days of J.D. Power and warranty TLC. My father ended up paying for the repairs, traded the fixed car in for a Mercury whose engine burned up and then, through a connection, bought a used Mercedes-Benz.

He bought me a BMW. My sister a Fiat. My mother a Nissan. And there was an endless string of Mercedes-Benzes, always slightly used, always the top of the line, all driven far in excess of 100,000 miles.

My love affair with the automobile was not that much different from my brethren's. We studied "Car and Driver" in the school library. We debated what machines we were going to own. But after driving a ten year old Chevy convertible which required constant attention, its front end having a mind of its own, I went foreign and never went back. Hell, I now drive a Japanese car, and

four years in there's been not an iota of trouble. I've got to bring it in for its final service under warranty, my last chance at getting problems fixed for free, and I've got nothing on my list!

We used to make fun of the Toyotas. The Corollas that looked like thirty year old vehicles, even though they were brand new. But then one weekend my older sister's boyfriend lent me his Datsun 510 and I was converted. Who knew driving could be so much fun?

That car and the 240Z. Suddenly, Japanese cars were not only reliable, but desirable. They were cool. And at the time even cheaper than their American counterparts!

Fiat's got some cool products, maybe they can make a go with the remnants of Chrysler.

Ford is looking to the future, dropping its reliance on large iron and focusing on new products like the Fusion. Took an exec from Boeing to turn the company around, but it will survive.

The usual suspects at GM ran that outfit into the ground.

And it's hard not to think of the analogies in the music business.

Detroit said it was just giving the public what it wanted. Isn't that what the music industry has been saying for years? You want these
divas. You want pop music. You want these beat-infused concoctions.

It's not our fault! We're in business to make money. That's our job, to deliver what you want.

Do we really want to laud Jimmy Iovine for concocting the Pussycat Dolls? Isn't that like slapping the backs of all those Detroit execs for selling all those SUVs? Ignoring the coming rise in the price of oil, the environmental concerns?

Then there's concert ticket pricing. They didn't make foreign cars to order, there were not a string of extras, you just went down to the lot and picked out the car you wanted. They were all similar, packed with what you wanted, not what the seller believed it could foist upon you. Sure, the Detroit companies were selling customization, but only one car my father ever ordered came through as it was described on the invoice. They lacked this, or you had to pay extra for that. Even as a twelve year old I couldn't understand it. What caused the inefficiencies?

And speaking of inefficiencies, the music business is rampant with them. That's the essence of physical distribution. Which is why the old guard hates digital distribution, their advantage has evaporated.

I was eager to learn the changes each model year. But then all the American cars ended up looking the same, and the exterior might be good, but what was under the hood sucked. The Japanese and Europeans introduced a model and improved it over years, the same way a great band develops over time. American companies kept on introducing new dreck, to the point I tuned out.

Too much of the public has tuned out new music. They just don't know who to trust. Certainly not the major labels. Nor radio, which featured 22 minutes of commercials an hour and was more about buying and selling outlets than what was broadcast on the stations.

It's about having a few well-marketed, credible products that wow the public. Hell, you can start with one! That's how Apple broke wide, with the iPod. How Subaru flexed its muscles in the U.S., with the WRX.

The usual suspects in the music business have expended all their capital. People have tuned into video games and Web diversions because they're more satisfying than music. There's no bait and switch, no mist surrounding the product that leaves you pissed when
you discover the core is vapid. Music does not drive the culture.
Facebook is much more important in people's lives than radio or music. Music has been devalued to the point where it's a third class citizen.

This has got nothing to do with P2P trading, nothing to do with piracy. There's no mass pulse in the music world that is making the public salivate, the way they might over a new European or Japanese car. The public has been screwed so many times that it's put music in the corner, to be trotted out for a party, but not as every day soul food.

I believe entrepreneurs will deliver better sounds. I believe independent players will eat the major labels' lunch the same way Japan ate Detroit's. But our problem is larger than that, how can we make music cool?

"South Park" already did an episode on Somali pirates. Where's the topicality in the music business?

Other than John Rich's parable, there aren't any big time musicians tackling economic or social problems in their songs, they're not even taking a stand in the media.

It's taken years. But the music world is in a similar place as Detroit. After decades of coasting, it's collapsed, and it's not sure what the path out is. Is the enemy traders, ISPs or the business itself. Could it be that the blame lies on the pros who drove this business to the cliff, milking millions all the way, believing they're entitled to their riches?

Where is the next Michael Jackson? Or Eagles?

Where is the next act that the public can rally around and declare great?

Britney might book revenue, but you'll have a hard time finding believers.

And you'll find believers for niches that can't expand, like trying to convince everybody they need a Honda S2000 or a Pontiac Solstice.

We've got a music problem. The music being purveyed is not seen as necessary to most people's lives. It's too discordant, or made for the cash register, not humans. Until we change the product, we'll remain in the doldrums.

Companies of the future will see the public as their partner. Rather than suing customers, they'll give them blankets, and a return of all fees when a concert is canceled. There's no SERVICE in this industry. And it was the lack of service that shredded Detroit's reputation. Quality and service. They're easier to lose than gain, and they can't be established overnight. We've got a long way to go to reestablish music's dominance on the popular culture landscape. It can be done, but only if the execs stop worrying about their lifestyle more than the music and the acts get honest and stop scalping their own tickets, only if making music isn't about fame but songs, only if stars earn that moniker from the music they make as opposed to the contests they win.