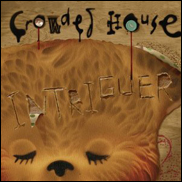 You know how you go to Taylor's show and all the little girls sing along? It was JUST LIKE THAT, only everyone in attendance had reached puberty.

A chill went up my spine as they started to play. This was genuine music, Neil Finn in his skinny tie and jacket, taking his job seriously, wringing the notes out of his guitar as he emoted into the microphone.

It was truly shocking, how great they were.

Oh, they did "Hole In The River". And "Amsterdam". And even "Message To My Girl"! Hearing that made me feel completely whole, like there was nothing wrong with me, like it was great to be alive and I'm gonna live forever, even though it's fine if I die tonight.

There were illuminated plastic ducks and trolls on the edge of the stage. The players stood atop rugs. It was all homey without being quaint. You see this was serious business, musicians working out.

They played for two hours and fifteen minutes. I had no desire to check my phone, needed no e-mail connection or Twitter feed, because the music was so alive, so vibrant.

Usually, when you see the codgers, it's nostalgia. But Crowded House played most of the new album, and the act felt more alive than that of the twentysomethings performing to hard drive. This is what it was like in the days before recordings, when you had to go to the show to get it.

And in the dressing room, Neil was like a guy you went to high school with. Chipper, adrenalized since he'd just had a great show, but with no airs whatsoever. He was normal. But so upbeat, I had to ask him, did he ever get frustrated, ever get depressed? He rolled his head back and laughed…it's part of being creative, the despair creeps in and you've got to create to get out of the space.


He's excited about playing. Gonna record a bunch of stuff and release it right away, not worry about complete albums and release cycles. Hell, on his next project, he's playing the drums!

And the show rocked hard enough at times that James Hetfield could smile.

Then again, there were moments when it was just Neil and his keyboard, completely sweet.


But he loved to play. He kept changing guitars, changing sounds, we were viewing a master at work.

He remembered the show! But for different reasons than I. You see at the time Split Enz were co-managed by Tommy Mottola, and there was an altercation in the pit when their Down Under manager's seats were usurped by Tommy's guys. Spit was involved.

Ah, remember the seventies, when you had to go to the show to get it? When you felt being there, drinking up the sound, was the height of life? THAT'S EXACTLY WHAT IT WAS LIKE! It was alive, not dead. No one was going through the motions. It was the essence. It's why I'm a believer.

And I thought love was only true in fairy tales…

I want to tell you about this one magical interlude, when Neil Finn's guitar wouldn't work.

That was a regular staple of the show, Mr. Finn switching guitars. But this time, the new axe made no sound. At all. To the point where a roadie entered from stage right and got down on his hands and knees and set to work.

You know how this goes. The performer gets pissed, says a few words, smirks and then throws the crap overboard, the roadie takes the offending merchandise off the stage and the performer acts like he's been the victim of a lightning strike, like everything he's prepared for his whole life has been ruined and the audience won't get its money's worth and the evening is now a total waste.

But not Neil Finn. He continued to smile. Despite the roadie being unable to track down the problem. Neil would strum, no sound would come out, the entire performance was now in jeopardy not even ten minutes in.


But as the roadie started tearing apart the effects, Neil began a running commentary. The roadie plugged Neil's guitar directly into the amp and Neil started strumming a now loud guitar and singing how he had no effects.

Then Neil strode to the mic, hovered over the roadie, and wrote a song about the experience.

And it wasn't a bad song! The changes gripped you and the lyrics described what was going on.


Eventually Neil moved to a keyboard. Well, this was after playing further on the mini-synth, creating 80's-like material, that's what he laughingly called it, 80's music, and if you shut your eyes, you could be watching MTV.

And this goes on for fully five minutes. Longer! And Neil's in a good mood, improvising…

You felt like you were witnessing a genius at work. That this wasn't a scripted part of the show, but this one screw-up had given you the opportunity to experience something unique, that you'd treasure.

And once the roadie got the guitar to work, once he had it plugged back into the effects pedals, he tested each and every one. Usually, the roadie gets sound and strides off. But now he was part of the show. It was like you were in Willy Wonka's factory and every wall was made of glass, you could see right through.

This is what we love about live performance. Not the exact rendition of the record, to the point where the strings and backup vocals are on hard drive, but the spontaneity, the feeling that this one moment in time is completely different than any other, and if you're not there, you've missed it.


The show didn't make sense without the audience. Neil alternately chided and inspired us, commented that the girl down front must be too hot in her winter coat, but not to take it off if she was comfortable, and led us in vocals. He thought our ability to sing had vastly improved since the last century. And he told us the end of the world was not near, he guaranteed the planet would survive at least until 2060.


Nonsense. But the kind of nonsense that makes us love performers. When they evidence a bit of personality, when they tell a story, when they show they're just like us, but somehow better.