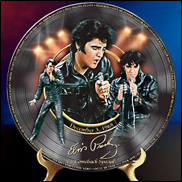 
You've got to understand, my first record was "Martian Hop", I loved the Four Seasons, in 1964 I became a Beatle fanatic. Elvis Presley was for old farts, even when he came back.


Still, I remember exactly where I was when I heard he died. Waxing my car outside my apartment on Carmelina. It was shocking. What we're unprepared for always is.


And then we endured the sightings, the impersonators, Elvis became a national joke, an almost kitschy touchstone for what once was.


People e-mailed me in droves telling me not to go. That it was an over-commercialized tourist trap. Proving that you've got to go your own way, do what your heart says, and inside I felt if I went to Memphis and didn't visit Graceland I'd be incomplete.

Not that my mind was blown until I got inside. Where I found a house preserved in 1977, a year I lived through that I thought I truly knew but had already forgotten. The appliances were dated, the TVs were not only not flat, they weren't even square. Time passes quickly.


Right inside there's a living room where you know the King entertained. With a piano and paintings of mom and dad.


And across the hall is the dining room. Formal, but it's the only one. And then, on the other side of the redecorated shortly before he died kitchen, was the Jungle Room.


You hear about these things, you don't realize how well you know them, how they're in your DNA even though you didn't even think you were paying attention. The Marc Cohn song started playing in my brain. I didn't want to leave. I figured if I stood there long enough Elvis would descend the stairs and begin to speak.

You never go to anybody's house anymore. That's the saga of being an adult. Abodes are private. Invitations are rare. So to go into the lair of this famous person not only felt like a privilege, it felt like the lid was being removed from a box of secrets. What stories these walls could tell. This is where it all went down. Where Lisa Marie was raised.


Now there's a museum full of gold records, a timeline of his career, but that didn't kick me in the gut. Not like going into the racquet ball pavilion to see the piano where Elvis sat and played two songs the day he died. Right there.


And I picked up a few tidbits.


His dad had spent time in jail. They'd lived in public housing. Vernon and Gladys were from that generation before high school graduation, never mind college, where you eked out an existence by your hands and wits. And they gave birth to this kid with great looks, great talent and great desire.


Elvis wanted success. More than anything. He's the embodiment of the American Dream. He made it and spent it. Back when an entertainer could be richer than any banker, when music was still king.


A minor attraction, but to see the video of Elvis riding his modified skidoo over the front lawn is to evidence the child, the hillbilly he was at heart.


Also riveting was the video of his parents in their pink Cadillac in the snow.

The small jet is not much different from the tiny private planes celebrities fly in today. But no one can afford a full-sized, four engine jet. Yes, the big plane was totally customized, with frivolous accoutrements, like 18k gold-plated sinks. And like the house, the plane is frozen in the seventies. There's a pair of Bose 301 speakers. And a pair of JBL 4311s. And an SAE equalizer. As well as two TVs that were definitely Sonys, despite having their logos removed, a departure from the U.S. equipment in evidence almost everywhere else.


This is obviously where it all happened. There were the legendary three TV sets, so Elvis could watch all the network news broadcasts simultaneously, just like President Johnson. And a pull-down screen for movies, we always heard Elvis loved watching movies.


And across the hall was a room with a pool table that was completely covered in fabric. Like the rest of the decorating, it seemed overblown and dated. But one thing you've got to know about celebrities is they redecorate on a whim, if Elvis was still alive the room would look nothing like it does.


There's a video of an interview with Elvis after he returned from active duty in Germany. We forget there was once a draft, that no one was above the law. He references Priscilla, but if you saw the clip you'd have no idea they were going to get married.


Strangely unaffecting, knowing he was originally buried somewhere else. The tombstones are too modern, too spiffy, unlike the rest of the premises.


Someone lived here. This is not a showplace gussied up to put up a good front. Then again, despite all the jumpsuits, there's no evidence of fat Elvis.


I only saw one white person. Everybody else was African-American. Utterly fascinating.


You'd see misspellings, like "peddle" instead of "pedal". All these years later you wonder why they've never been corrected.


You learn about the King's generosity, they've got tons of checks to charities. But really, it all comes down to the music. The clips of the '68 comeback special. The jumpsuits from Vegas… It's like it all happened yesterday, it's that fresh in our minds, but it was so long ago.


Meanwhile, although you learn that Elvis didn't write his own material, he produced his records himself.


And you wonder if he would have been as big without Colonel Parker and RCA. Despite their flaws, the Colonel made the deal, and RCA broke "Heartbreak Hotel".


It's an American story. One I've never seen better told. It gives the downtrodden hope that they too can break through. Even better, at the core is the tunes, which live beyond the man who made them.


P.S. In one of the videos on the plane, I learned Elvis was an avid reader, he traveled with a trunk of books.


P.P.S. You can go to Washington, D.C. and see the monuments. Or you can travel to California and see Hearst Castle. But if you want to really learn about America, the best place is Graceland. It's not only the story of the King, but those in attendance. A cross-section of this great country of ours. Not all lookers, not all rich, it's very different from television. These are the people who believed, and still do.