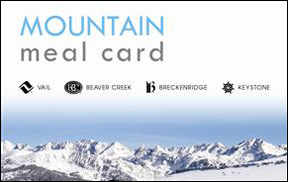 I wanted to buy a Mountain Meal Card.

Last year, Vail Resorts decided to drive up volume. They lowered ticket prices. Not daily prices, those are still sky high. But if you were willing to lay down $549 you could ski every day at A-Basin, Beaver Creek, Breckenridge, Heavenly, Keystone and Vail, all of the company’s ski resorts.

Sure, this was a deal for frequent users. But what about the casual user? Not only did he get a deal on a week of skiing, he came back to one of the company’s resorts later in the season because skiing was essentially free!

Vail Mountain had some of its busiest days in years.

Deciding to amp up the deals, this year Vail Resorts introduced the Mountain Meal Card. Not only were they upping the quality of the food and giving a daily deal, if you were willing to lay down a hundred bucks, you got $110 worth of food. Put down two hundred dollars, and you got $240 worth of food!

I tried and tried.

Then I took to the phone.

Where I got one inane, uneducated operator after another. Ski bums recently out of college who knew how to sell lift tickets and lodging packages, but none of them had even heard of the Mountain Meal Card, even though it was featured on the company’s site.

I ultimately spoke with four people over the course of forty five minutes. I was wasting more time than the card was worth. But I was now interested in the consumer experience. How could they get it so wrong?

Still, I was frustrated, having invested this much effort.

I tweeted to Rob Katz, CEO of Vail Resorts, I said:

@RickysRidge I want to buy the $200 Mountain Meal card, can’t be done on site, on call with 3rd Vail employee, wasting time. Can’t get help.

@RickysRidge Been on hold for 45 minutes.

@Lefsetz Thanks for the heads up- will get right on that and get it straightened out.

I felt like I mattered. I felt like if I ran into Rob Katz on the hill, he’d remember me.

It was the exact opposite of the major label mentality, where the executives are gods, flying in private planes, hanging behind velvet ropes, screwing you left and right while making money hand over fist.

That’s what the hoi polloi believe. How can Edgar Bronfman, Jr., Doug Morris, Lyor Cohen and Jimmy Iovine be SO OUT OF TOUCH?

In today’s "New York Times" there’s an article on the use of Twitter in retail. Saying 47% of retailers planned to increase their use of social media this holiday season.

Employees tweet about stock. You can tweet asking for help, hell, Best Buy’s got a complete team!

Isn’t it fucked up that Jimmy Iovine and Dr. Dre are trying to sell their crap in Best Buy and they don’t have Twitter accounts where potential buyers can ask questions and bond with them?

As Blind Faith once sang, it’s time to come down off your throne.

Not that you have to change your lifestyle and slum it.

Rob Katz is so damn rich that he retired to Boulder after 9/11. Left New York with the money he’d made on Wall Street. He was on Vail Resorts’ board, and they ultimately asked him to run the company. When he tweets about his travels I just know some of those planes are private. But I don’t care, because I feel I know him and he took care of my problem!

Vail Resorts’ bookings are up.

Meanwhile, he’s taking a hit himself. After laying off employees last year, he sacrificed his salary. Do you see any label head, still with a job, sacrificing whatsoever? No, fuck the laid off employees, let’s blame the customers and hide!

Meanwhile, Live Nation is the one taking chances, with No Service Fee Wednesdays.

As for Record Store Day… Nothing wrong with it, but in today’s world you don’t hide behind your retailers, you get into the fray yourself.

Stunningly, I got a response in minutes. That used to be a black hole, contacting the Web help. I got a link to a new page where I could buy the $200 card.

But, not long thereafter, I got the sweetest e-mail from someone at Vail, bending over backwards trying to help me.

And on the next day, THANKSGIVING, I got another e-mail from a higher-up.

And remember, they didn’t have my e-mail address! They had to do some Web research to get it!

And either you play by the new rules, or you die.

Buying, Selling and Twittering All the Way