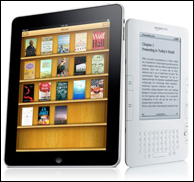 There's a war going on in the music business and rights holders are afraid they're going to lose.

The public is clueless, it barely sees the battles while it steals music. But the future is subscription, which doesn't involve only music, but products ancillary thereto, maybe even completely virtual.

If you've been following the Amazon/Macmillan story you know that the whole e-book pricing system has been affected by the iPad. There's a shift to the agency model, wherein Apple gets 30% and renders the remaining 70% to publishers. Unlike Amazon, Apple doesn't really care what price books are sold for, they're in the hardware business. In other words, they want to sell iPads. Whereas Amazon wanted to sell e-books below cost to increase the company's market share, hopefully into a dominant position.

But the fascinating conclusion is that the winner is Apple. You need an iPad to read that book. You're not going to buy a Kindle, certainly if the books cost the same, the Kindle just isn't a good deal. As long as e-books are not priced exorbitantly, Apple wins. And the publishers, smiling triumphantly, don't even know what hit them.


What hit them? Well, a writer can make the same 30/70 deal directly with Amazon, the online merchant already announced that. And with publishers signing fewer authors, conceding the landscape to upstarts, it appears to be just like the music business, wherein the major labels lost control.


The labels feel they've lost control to Apple. And they don't want that to happen again. So they're fighting Spotify, not even knowing what this platform and other similar companies are selling. They're not selling music, that's just the come on, they're selling the accoutrements, not only concert tickets but social networking, they're creating an ecosystem, that will rain down dollars.


Two video game publishers are contrasted. One that sells discs and another that gives the games away for free. The seller of physical media went out of business. The virtual goods company is thriving.


Don't think about this as giving away music for free. Think bigger. If you can get someone hooked, what else can you sell them?

But let's start with Spotify. In every market the company has launched, the service is free. But if you want it on your mobile device, you've got to pay. Not everybody wants this portability, but you'd be surprised how many do. And will in the future. Because by paying the monthly fee, you don't only get the ability to tote your tracks around, but knowledge of what your friends are listening to, access to the band, a first crack at concert tickets, maybe even virtual concerts.


You start with free. That's the come on. Just like with video games. Then you sell bits and pieces, not music, but items ancillary to music, the ability to go to a party, maybe even virtual. What works is unknown, but the first step is getting people hooked. If you saw how much money is made in virtual items online, clothes for avatars, ability to unlock doors for exclusive access, you'd be stunned. This barely exists for music, because rights holders are afraid. They believe in selling physical music, an album at a time. And they're so busy protecting that model, they're going out of business. Hell, just ask EMI. Instead of realizing it starts with the music, and instead of focusing on people stealing it, the question is how can you entice them to pay for it?


Certainly not by castigating them for theft, by threatening them with prosecution for copyright infringement. Instead, you entice people, giving them a free taste, just like a drug dealer, and then sell them everything surrounding the music. You can't steal an experience. And if we make your life easier…


That's Apple's plan. To get you to overpay for what you didn't even know you wanted. In the future, it won't be about owning music, it will be about being a member of the club, of the tribe. With evidence of how long you've been a fan, what shows you've gone to, the number of times you've spun each and every track. People will PAY to play in this arena, to publish evidence of their devotion, to compare and bond with others.


This is the future.


But the rights holders abhor the future.


Techies, people of the age the labels have fired or never hired, know all this. But they won't get involved in music because they just can't get the rights.


The future of music will look nothing like it does today. It won't be about ownership, it will be about belonging. You can play the video game at home, alone, or you can go online, where you're a member of the club, connecting with millions. You've got to pay for this experience. Which gamers do gladly.


The future is imminent. But only if the rights holders get out of the way. Only if innovation is unlocked. Copyright shouldn't be abandoned, but it's blocking the future. Just like rap blew up by stealing old tracks, new music platforms will be built on sampling the wares of rights holders. And like the owner of those old sampled records, the key is to say YES, to get on the bandwagon, to collect some of that new money. Instead of arguing with Activision over Guitar Hero license rates as the franchise fades away and doesn't radiate. Stay two steps ahead. Or face extinction.