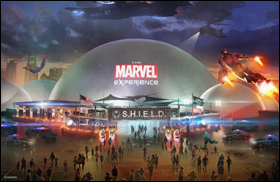 PHOENIX, AZ (CelebrityAccess MediaWire) – Local Phoenix indie folk performers Jared & The Mill attended The Marvel Experience at Salt River Fields on Monday December 29th and enjoyed their experience so much that they are returning to visit and perform outside the show on Friday night, January 2nd at 6:00pm. The street performance of Jared & The Mill has been seen across the country; last year they were in Texas for SXSW and were featured throughout the Austin community. Jared & The Mill received national media recognition earlier this year when, while in Austin, they did a special performance for a victim of a hit and run accident who couldn’t attend their showcase; so they performed in her hospital room.


Marvel Experience is previewing its first-of-its-kind, hyper-reality attraction to positive local media reviews of the show that spans three acres, encompasses seven colossal Domes and features the world’s only 360-degree, 3-D stereoscopic full-Dome attraction which guests enter through a life-size Avengers Quinjet. Along with the aforementioned, there is a thrilling, state-of-the-art motion ride and an interactive “training center” that offers the opportunity for Marvel fans of all ages to actually become “part of the experience.”


“It was incredible being exposed to the Marvel Universe in such a tangible way. I've been a fan of the comics my whole life and to experience those heroes at such a real level was bliss for my inner child,” says Jared & The Mill lead singer Jared Kolesar.


Jared & The Mill is in the process of recording a new EP (Life We Chose) with Tony Berg. It will be released on April 7th followed by touring all throughout next year. –by CelebrityAccess Staff Writers