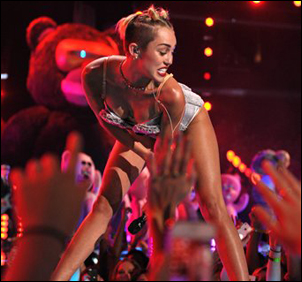 
She’s laughing all the way to the bank.


Did you catch the audience in this clip? Not the automatons dancing and screaming around the stage like this is their last night to live, but those in the seats behind? You’d think they were at an anthropology lecture.


Which in actuality they were. What we’ve got here is a twenty year old so creatively bankrupt that’s she’s looking back instead of forward, breaking no rules or taboos but just replicating poorly what has happened before, with Madonna kissing Britney and Prince appearing in assless pants…all to stir up those who don’t watch so they’ll make this evanescent turkey of an event have legs.


But those in attendance are not buying it. They’re so bored that they’re looking at their cell phones. They’re not jumping for joy, they aren’t even leaving their seats, because what you’ve got here is a made for TV moment that doesn’t work live, unlike the best of music, and they just don’t care.


And you wonder why we live in a culturally bankrupt society.


It’s a performance. With no socially redeeming values. It’s meaningless. Neither fish nor fowl. And if you’ve got your knickers in a twist about Miley Cyrus cavorting on stage at the VMAs you must live a cloistered little life and be afraid of your shadow. I mean come on, where do you live? Are you scared of boobies and gay people too? Miley wasn’t twerking so much as she was tweaking an establishment that has made her the star of the week even though her talent is so limited it could fit inside a thimble.


But it’s not only parents, but even Cyndi Lauper. Hey Cyndi, I thought it was about embracing your true colors! If some people want to be exhibitionists and sell their souls for fame and money shouldn’t they be included in the big tent? Isn’t that what you did?


So MTV gets what it wanted. An outlet so bankrupt with nothing to do with music that it gives One Direction the Song of the Summer Moon Man gets to look all dangerous and cutting edge when nothing of the sort is true.


And Miley Cyrus gets to extend her television fame just a bit longer.


And Robin Thicke shows he’s the tool of the system we always believed him to be.


You know who the star of the show was? Kelly Clarkson! Who didn’t even appear, who tweeted:

Now Kelly’s not offended by Miley Cyrus and Lady Gaga, she’s criticizing them for stooping so low, for focusing on the trappings as opposed to the music. Yup, that’s how low we’ve sunk, Kelly Clarkson is the artistic voice of reason.

Then again, only Kelly Clarkson stood up to Clive Davis, calling his hagiographic autobiography hogwash. She’s got a backbone. Hell, she was even willing to appear in public fat, she didn’t get plastic surgery. She’s everything the classic rock artists used to be, before they all got tattoos and facelifts to appear young and hip to an audience so aged they come to the show on scooters.

I mean this is the best the media can do? Be manipulated by both MTV and Ms. Cyrus?

As for the bloviators… Who is giving these people ink? Who cares what these parental organizations have to say. They’re tiny in size and miniscule in impact. But reporters without brains print their words because they believe fake controversy sells papers/web ads.

Hell, most kids didn’t even watch this travesty, this marketing extravaganza.

And not one had their jaw drop, offended by what transpired.

But we’ve got parents worried setting parental controls, worried about what little Adam and Brooke might see when the truth is they’re exposed to all of it, and all the stuff that bugs their parents doesn’t even merit a shrug from them. Nudity, violence, sex… It’s available online 24/7.
But put it on a lame cable channel and trump it up with media repetition and we’ve got a fake controversy, whose only effect will be to make little boys and girls at home believe that they too can test limits on TV with little talent for big bucks.

Then again, what would you rather do, watch this lame clip or get a sext from your junior high school classmate via Snapchat, something that disappears before your Facebooking parents have even heard of the service.

We live in a puritanical society. Which is offended over irrelevancies. Did you know women go to the beach topless in Europe! Where are the editorials? Where’s the offense?

The most offensive thing here is people of little talent getting so much attention.

But they wouldn’t get it if everybody wasn’t complicit.

Truly want to change the world? Then move right along, pay no attention, especially in this Internet age where whatever transpired will evaporate in a matter of hours.

But no, you’ve got to fan the flames of this irrelevant incident to feel good about yourself.

Let’s ignore Miley Cyrus. Let’s ignore Kim Kardashian. If we stop paying attention to these no-talents there will be a better chance of true talents emerging.

But that’s not how we like it in America. The poor are embroiled in fake controversies and the corporations get richer. Yup, as much as Miley Cyrus benefited from her VMA appearance, it’s MTV that truly triumphed. Imagine what they’re going to charge for ads at next year’s charade!