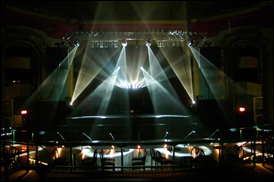 In 1928, just seven years after Royal Oak was incorporated as a city, architects Rapp and Rapp, most well know for their movie theatre design, stepped into the Royal Oak Music Theatre transforming it into the art deco venue that stands today.

"I remember coming there when I was a boy," recalls Thomas Zarro, a long time patron of the theatre. "My brother and I used to watch movies at the theatre back in the 40’s. In the 80's I used to bring my boys there to watch Marx Brother's Marathons, and I even attended Royal Oak Music Theatre Reinvented this past September."

Undergoing dramatic renovations to bring back the original grandeur of the venue, AEG Live and the Royal Oak Music Theatre have committed themselves to improving the patron experience while upgrading and maintaining the physical theatre, today and for years to come. “"t’s breathtaking," notes Zarro. "It’s nice to see there are still people committed to preserving these venues."

Ronnie Long remembers his first concert at the Royal Oak Music Theatre, "It was the 70’s and AC/DC was the band. Today, it’s a place I call home." Serving as the theatre’s production manager for the past 15 years Long’s experience includes unforgettable performances by Prince, U2, George Clinton & The Parliament Funkadelic, John Heffron, The Romantics, John Legend, Velvet Revoler, and D.L. Hughley, just to name a few.

"It’s your neighborhood theatre," he adds. "A place where entertainers and story tellers can go, a place where patrons can share an intimate space with the performer, and ultimately a place where people can make memories"

Over the past 80 years the 1700 capacity venue has done just that and will continue to do so years to come. Upcoming events at the theatre include Gogol Bordello, Gaelic Storm, Justice, Rob Weir and Ratdog, Robin Trower, Craig Ferguson and more.

"The Royal Oak Music Theatre plays a key and central role in establishing the city as an entertainment district by being the main catalyst to energize people coming out," notes Jason Rogalewski, Talent Buyer – AEG Live Midwest. "The Royal Oak Music Theatre is the premier mid size venue in Metro Detroit and will be vitally important to the touring industry as it moves forward to book more shows at venues of this size and caliber."

As the city of Royal Oak continues to transform into a trendy restaurant, shopping and entertainment district and the demand for new entertainment and night life broaden, the Royal Oak Music Theatre will continue to grow and remain one of Metro Detroit’s most versatile venues, who looks forward to celebrating another 80 years of business.

AEG Live, is committed to the planning, rebuilding and transformation of the venue. Phase 1 completed projects include: 3 new mahogany bars, new paint throughout venue, new solid surface flooring in main theatre, new carpeting in balcony, new VIP room in balcony and new lighting fixtures throughout the theatre. Phase 2 & 3 start dates are to be determined.

A Few Past Shows: