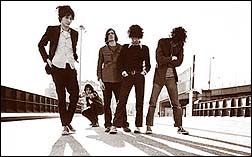 The New York fivesome have gone from being completely unknown to being rock’s big rising stars according to mtve.com. They are ready to rock the pants off the people of Europe once again.

The sudden rise and rise of The Strokes should come as no surprise. They bring what others invariably lack – great songs played with electric enthusiasm, great clothes, and great looks. Their debut single, "The Modern Age" released back in January 2001 on Rough Trade and an NME Single Of The Week, instantly set a standard that can't hope to be bettered too soon. Radiowaves so long consumed by dull indie same chord sludge made way for a heady shot of raw, adrenalised garage pop that seemed to effortlessly converge The Velvet Underground, Television, Modern Lovers and The Stooges whilst sounding miraculously contemporary.

Their mini-tour of the UK in March was thee hot ticket for those quick to catch on – 300 people squeezed into the space for 150 at London's The Monarch left no room for doubt – this was the most exciting band to come along in a long, long time. After only one single, they were on the cover of NME, broadsheets and magazines were devoting huge features to them and Milan catwalks vibrated to "Last Night." Follow-up single, "Hard To Explain/New York City Cops" further confused any detractors – every song was an A-side, every song was cool as fuck. "Hard To Explain" smashed it's way into the UK charts at 16, drummer Fabrizio smashed his hand, the band graced the cover of NME and sold out a much bigger UK tour that culminated in a show to a star-studded audience at London's legendary club, Heaven. For once, the hype is justified if not necessary. The Strokes are Julian Casablancas (vocals), Fabrizio Moretti (drums), Nick Valensi (guitar), Albert Hammond Jr. (guitar) and Nikolai Fraiture (bass).

So far the following European tour dates have been announced: