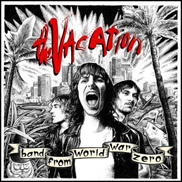 The Vacation has signed with Rick Rubin's American Recordings label, which will re-release the L.A. band's full-length debut, Band From World War Zero, this fall. The album originally hit store shelves in March.

"The first time I saw The Vacation, I instantly fell in love," says American Recordings President Dino Paredes. "I'd heard they were a great live band, but I definitely didn't expect what I witnessed. The show was completely chaotic, yet so much fun. [Singer] Ben Tegel was a madman–he ran through the crowd, getting sweat all over my shirt. They're a great fit for us because they have everything we look for in our artists: great songs, a great live show and great personality. And we love them!"

"I've always believed in Ben and Steve's vision," insists the band's manager, Jeff Castelaz. "They are narrators of the Hollywood street, like the Chili Peppers and Jane's Addiction, and it was important to sign them with a label that would protect their vision while fearlessly foisting it on the world. American is that label."

Although the official release date is still pending, the American Recordings/Warner Bros. staff is wasting no time in gearing up for the re-release. "For now, the plan is to re-master the record, with Rick Rubin overseeing it, and then set a proper release date," Paredes reveals. "Meanwhile, we want to capitalize on the existing momentum at press and local radio, so we're going to put the band on the road and keep them out as long as humanly possible."

The gritty rockers kick off their upcoming string of live dates at CMJ on September 15 as part of the Cast Management/Dangerbird Records showcase after which they’ll be joined by Diamond Nights. In addition, The Vacation will join Black Rebel Motorcycle Club for two October shows.