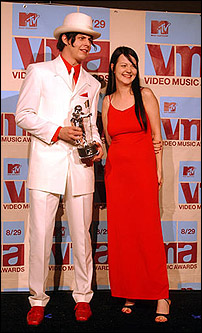 The White Stripes are set to support THE ROLLING STONES on dates of their North American tour in October.

The duo will open for the rock titans at the Toronto Air Canada Center on October 16 and the Columbus Nationwide Arena on October 20.

The Stripes had previously announced that two London dates in September with Yardbirds guitarist Jeff Beck would be their last of the year. However, the draw of The Stones, currently on their 40th anniversary '40 Licks' tour, proved too much.

The shows come just a few days after The Strokes play their opening shows for The Stones at the FedExField in Washington on October 4 and Hartford Civic Centre on October 5.