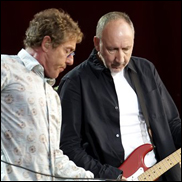 LOS ANGELES (CelebrityAccess MediaWire) — For many, the World's Greatest Rock Band, The Who, will be seen by one of the largest television audiences in history when the group headlines the Bridgestone Super Bowl XLIV Halftime Show on CBS Sports at Dolphin Stadium in South Florida on Sunday, February 7.


The Bridgestone Super Bowl halftime show is one of the most anticipated musical events of the year. More than 151 million viewers in the U.S. watched last year's show. The Super Bowl and halftime show will be broadcast worldwide in more than 230 countries and territories.

Many of the classic songs the band will perform are just a few of those included on Greatest Hits (Geffen/UMe), to drop on December 22, 2009. The largest single-disc "best of" collection from The Who in more than ten years, it is the first to span the group's entire recording career to date, from 1964 to 2006. The 19-selection Greatest Hits brings together some of rock's most important, influential and incandescent touchstones, along with an essay by renowned music critic Dave Marsh.

The Who have sold over 100 million albums and won every award including Grammys/Brit Awards/Lifetime Achievement. They have been inducted into both the US Rock and Roll Hall of Fame and UK Music Hall of Fame. Their charitable work is legendary with millions of dollars raised over the years for a variety of causes. This work was recognized by the award of a CBE to Roger Daltrey in 2005.

2008 saw them return to the US for MTV's Rock Honors, and a further string of US dates; that year, they also completed their first ever arena tour of Japan. This was followed by the receipt of the prestigious Kennedy Center Award at The White House and the year was topped off by some incendiary shows at London's O2. In 2009, they completed a Tour of Australia and New Zealand. Townshend and Daltrey continue to look forward with energy and optimism and time will tell what the future has in store for this most remarkable of rock acts.

I Can't Explain
My Generation
The Kids Are Alright
Substitute
Happy Jack
Pictures Of Lily
I Can See For Miles
Magic Bus
Pinball Wizard
Behind Blue Eyes
Baba O'Riley
Won't Get Fooled Again
Love, Reign O'er Me
Squeeze Box
Who Are You
You Better, You Bet
Eminence Front
Real Good Looking Boy
It's Not Enough